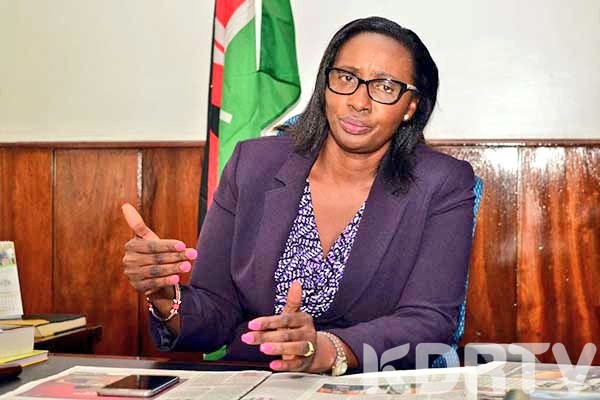 Elachi returned to her office on Wednesday morning, 13 months after being impeached by MCAs over what they called gross misconduct. Despite being elected by Jubilee members, she was escorted to her office by ODM members.

But trouble started a few hours later when Guyo led other members to forcefully eject her again. Chaos ensured at city hall as the group lobbied teargas, and broke some furniture in the melee.

Elachi said that one of her assistants heard three gunshots. She has asked the DCI to investigate Guyo and confiscate his gun for misuse.

‘The majority leader worked in with a few people and they started breaking everything. Because they wanted to beat me, they threw teargas to confuse us.’ Elachi told the media.

She warned the majority leader that he will be held responsible if anything happened to her because he had promised to kill her before midday.

According to her, the majority leader arrived at her office with a group called Gaza. He also compromised the police officers manning the building to allow goons to come in and destroy the assembly.

Despite the chaos, Elachi has remained adamant that she is going nowhere and dared Guyo to do his worst to her. She said she is a team leader and a team leader dies for her team.

Elachi was unanimously impeached by MCAs in September last year. 103 members voted to impeach her, against only two who rejected the motion that was tabled by Waithaka MCA Antony Kiragu.

She was accused of among other things gross misconduct, abuse of office and disrespecting the county assembly board.

The MCAs accused her of interfering with the purchase of the speaker’s residence, which she allegedly inflated the price by more than KSh 25 million.

She was also accused of using public funds for a trip to Dubai to receive a fake honorary degree.