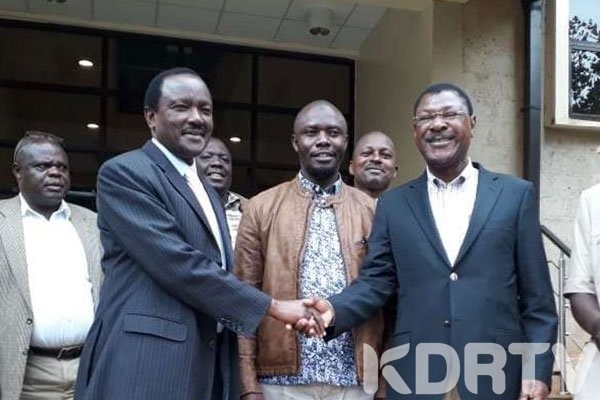 Raila Odinga has yet again received another blow after his NASA counterparts Kalonzo Musyoka and Moses Wetangula pledged their support and endorsed Ford Kenya candidate Khamisi Butichi in Kibra by elections.

This certifies the wrangles in NASA coalition, with the long blossomed partnership thrown out of the window..

Speaking yesterday at the Wiper offices, the duo announced that they had decided to work together and offer full support to Ford Kenya party candidate, not minding the pact that once existed with ODM leader Raila Odinga.

“Ford-Kenya and its leadership stood by our candidate in the Embakasi by-election and we have decided to return the favor. The brotherhood between Wetangula and I goes beyond pacts, as we joined politics together,” said Kalonzo.

The two parties that have merged for the Kibra elections came to a conclusion that their candidate would be endorsed at a later date, with intense campaigns scheduled in the region that will guarantee their candidate’s win.

According to Wetangula, their candidate was the strongest of all Kibra contenders and they were certain he would carry the day.

This puts the race of Kibra by-elections in muddy waters since has been turned into a battle of supremacy, a portrayal of the intensity of 2022 general elections.

Raila Odinga, Kalonzo Musyoka and Moses Wetangula were part of the National Super Alliance Coalition in the 2017 General elections where they pledged support and determined Odinga as their flag bearer.

READ ALSO: Kibra Is Not Raila’s Bedroom, Lashes out Mudavadi.

However, things started taking a new tune after the swearing in where  the two chickened out of the famous mock swearing attracting ridicules from Kenyans.

Making it worse was the handshake between Raila Odinga and President Uhuru Kenyatta where the other NASA leaders accused Raila of not involving them, rather presenting his own selfish interests.

JUST IN: Raila arrives at Stoni Athi for a crisis meeting with NASA co-principals days after his meeting with President Kenyatta which Kalonzo, Wetangula and Mudavadi complained they were not involved #NASAUnity pic.twitter.com/uOIlY5Vryh

The Kibra race has intensified the wrangles, and the relationship has been pictured to deteriorate with each day.

For instance, ODM through their Secretary General promised to divorce and dissolve the NASA citing betrayal.

“After the Kibra elections, the party leader has given me the go ahead to dissolve NASA and have our party out,” said Edwin Sifuna, ODM secretary General.

Musalia Mudavadi who also counts as the NASA pact members has taken his solo route by fielding his own party’s candidate and orchestrating campaigns across the country to market ANC and popularize it ahead of 2022.

It is with no doubt that the Kibra race has dwindled the NASA relationship and pact, and it is only a matter of time before everything falls apart. Currently it is hanging on a loose thread.