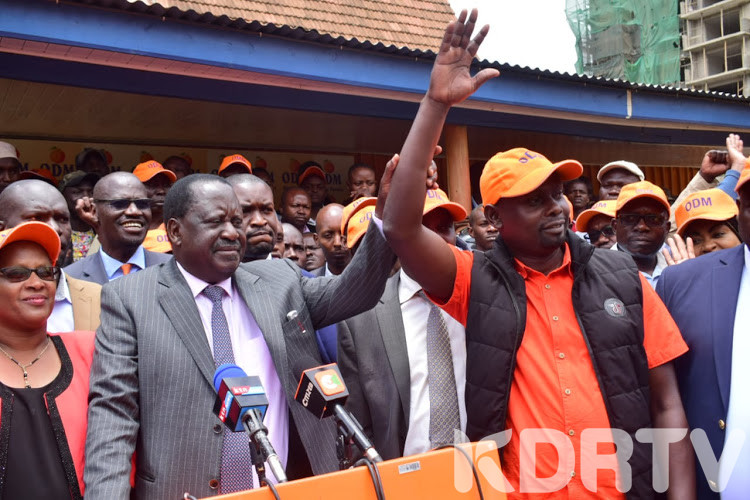 Kibra has been the bedrock for Raila Odinga for over two decades, with some of his staunch followers residing from the area.

Going by the last demonstrations planned and orchestrated by the ODM staged to fight government, IEBC and the past elections, a series of very committed Raila mania people were  captured as frontiers risking their lives in honor of his invitations.

At the same time, this is explained by the intense deployment of police officers in the region during violent elections or demonstrations.

According to the statistics from Human Rights Groups, Kibra was among the worst hit after last general elections, with the highest number of people killed.

One woman interviewed by citizen tv narrated her love for the enigma, dedicating her entire day an plans to take part in the anti IEBC demonstrations.

This means that a loss for ODM in Kibra would be treated as a very big loss, not only in the region but also nationals.

According to close sources, Raila Odinga has personally taken over the campaigns in Kibra, laying down measures and strategies that would guarantee the anticipated win.

Unlike in the loss in Embakasi and Ugenya, ODM is not taking any chances in Kibra, and has laid machinery on the ground to make door to door campaigns with an anticipated rally to be carried out later in the month.

“Raila’s following is no longer as big as it used to be. His magnetism is wearing out and the Kibra seat contest appears to be fluid. If he loses,  that would be a message that he is on the way out of the minds of people,” said Macharia Munene, a lecturer at the University of Nairobi.

The moment Jubilee fielded their candidate with Ruto’s full support, it was a wake up call for Raila and a way to prove to him that he has been in politics longer than him.

For instance, after the party primaries, he reached out to those who had lost in the nominations and asked them to back Imran Okoth, with the fees contributed refunded.

The country is currently picking up on the wave of being governed by younger politicians and of the new generation including Mike Sonko, BabOwino, Johson Sakaja, Simba Arati and many more.

The old leaders are slowly fading into oblivion and Raila’s loss in Kibra is most likely to shape the 2022 outcomes.

According to a political analyst and a lecture at The Nairobi University, nobody would take Raila serious in case of a loss in Kibra. His huge supporters will be substituted by people who want him to retire out of politics and endorse younger people who will take over his foot steps.