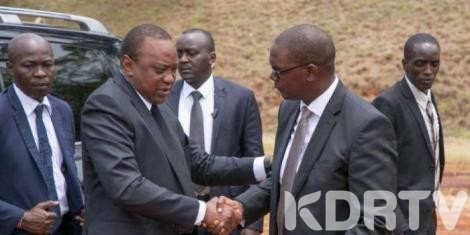 Kenyans were left in shock early this year after President Uhuru Kenyatta pulled down all his social media accounts.

The official statement from State House was that the accounts had been pulled down after unauthorized access, or in other words, being hacked.

But State House Chief of Staff Nzioka Waita, who relayed the above information followed it up with another controversial tweet.

It seems the President’s stand on corruption has generated all manner of reactions.

In other words, Nzioka confirmed that the accounts had been pulled down because of a controversial tweet President Kenyatta had made earlier on about fighting corrupt individuals regardless of whether they were his brothers or closest political allies. The close political ally was interpreted to be Deputy President William Ruto.

Only Waita could have the ‘balls’ to pull down Uhuru’s Twitter handle. Welcome to the new era of the Uhuru Kenyatta administration where Waita was pulling the strings.

The move showed why President Kenyatta had appointed Waita to the plum position of Chief of Staff despite being only 42 years at the time and with limited experience in the civil service.

Waita was headhunted from Safaricom where he worked as Corporate Affairs Director. He joined State House as the Head of fancied Presidential Delivery Unit (PDU). The role involved keeping an eye on critical government projects of interest to the President.

Within two years, he had risen to the position of Deputy Head of Public Service, working under Joseph Kinyua.

In January last year, a local daily described Waita as the fastest rising man in government circles after he was appointed as the Chief of Staff at State House. The position, according to the paper, came as a result of hard work, discipline and professionalism.

Those close to him describe him as an easily accessible person. However, he does not tolerate nonsense and is ruthless when it comes to performance-related issues.

Waita is an Advocate of the High Court of Kenya and a Certified Public Account. He holds a Bachelor of Laws Degree from the University of Sheffield in the UK. He also has a Post Graduate Diploma in IT and Communication Law.

@StandardKenya reports that the highly professional and diligent @StateHouseKenya Chief of Staff @NziokaWaita "is under siege" from top men keen to succeed Head of Public Service Mr Kinyua. But could the story have been "influenced" in one way or another? @DCI_Kenya @EACCKenya pic.twitter.com/O7I33Gv0go

He is so close to the President that Uhuru personally attended the funeral of his father Raphael Waita in March this year.

But Waita is now under siege from the powerbrokers at State House and has reportedly taken a ‘sabbatical’. Unsubstantiated reports also claim that he could have even resigned.

Philip Magal: Nzioka Waita has proved himself as an astute public servant, he is the best man for the head of public service job.#KTNMorningExpress pic.twitter.com/EBauRfRaPp

His biggest problem is that he is the favourite to replace Kinyua as Head of Public Service when he retires in  January.

The powerbrokers at State House want someone from Mt Kenya to take over the key docket, Waita is a Kamba from Machakos County.