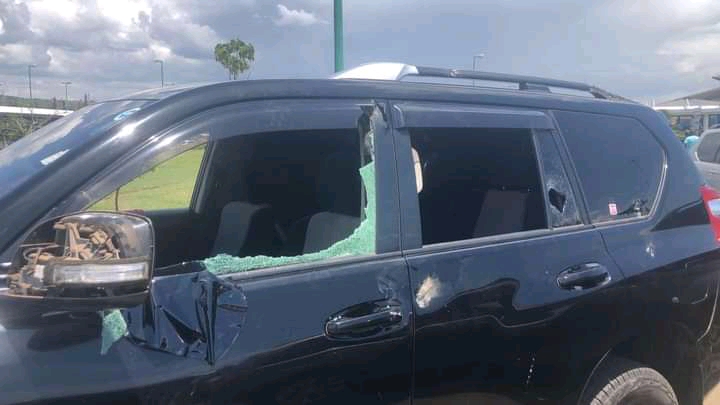 The hustler nation’s mortocade was subjected to a crude and rough treatment by the wild and heated crowd of Kondele youths at roundabout in Kisumu pelted stones at DP Ruto’s car while chanting pro-Raila’s slogans.

DP Ruto who is in Nyanza region on three days tour to popularize his presidential bid was forced to cut his speech short after the angry and rowdy youths stormed the rally alluding that the hustler nation’s Bottom-up economic model only makes sense in a country that doesn’t acknowledge and respect the impact of education in this 21st century.

In the middle of the ugly and razzmatazz scene of throwing stones at Tangatanga mortocade, Deputy President William Ruto’s security swung into action to disperse the angry youths by lobbying teargas to re-install peace. This is the second time such unnecessary ugly political scenes have been experienced in Nyanza. Barely two months ago, the renown business mogul Jimmy Wanjigi who declared to downplay Orange Democratic Movement (ODM) party leader Raila Odinga for the party’s ticket in 2022 presidential race was stoned in Migori County during his frenzied rallies.

Could this be a perceived vindication of Suna East MP Hon Junet Mohammed’s words of Nyanza region taking over next government if Raila clinches to the country’s top seat?

A month ago, Raila’s trustee Junet Mohammed was put to account following his unconsumable declaration that Nyanza people will take over the next government if the ODM party leader Raila Odinga succeeds Uhuru in 2022. While pointing at Health CS Mutahi Kagwe, Junet revealed that even the Mt kenya region who are rooting for Raila’s bid will be visiting Nyanza region as typical visitors.

Tangatanga MPs have condemned DP Ruto’s treatment by the Kondele youths citing that every politician is protected by the Kenyan constitution of 2010 to stretch their political marks to all parts of the country regardless of their tribe, community and language.