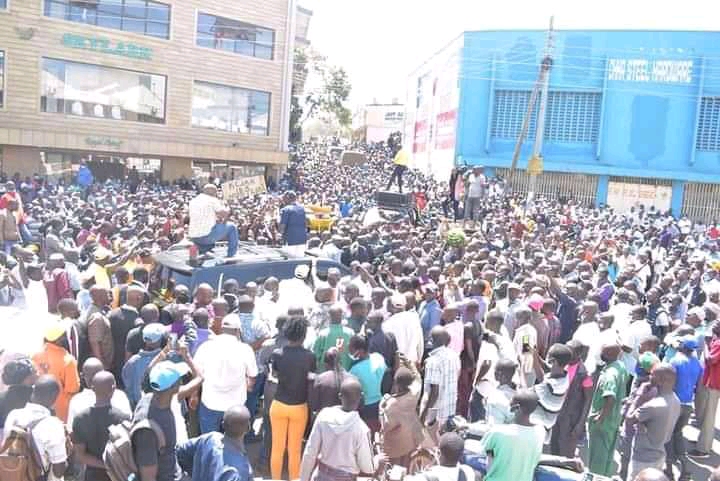 Deputy President William Ruto has been sandwiched between two towed decisions of whether to address the gasping crowd at Kondele roundabout in Kisumu or abandon the mission and head to Migori County for an empowerment program.

Kondele Youths have gone wild and teared the hustler nation narrative into money gaming as have filled the air with “tunataka pesa” chants ahead of DP Ruto’s arrival to sell his presidential bid at Kondele roundabout.

The heated crowd have vowed not to withstand the bottom-up narrative if the second in command DP Ruto will not smear their dry pockets with Ksh6,000 each going by an adjacent Orange Democratic Movement (ODM) party leader Raila Odinga’s pledge to entitle each jobless Kenyan Ksh6,000 monthly.

Ruto has been keen in marking his opponents’ territories by selling his 2022 presidential bid in the efforts of blowing final whistle of revamping and shaping his political ambition for a hot 2022 race where he expects to face tough opponents (Raila Odinga, Musalia Mudavadi, Jimmy Wanjigi, Mwangi Wa Iria, Speaker Justin Muturi etc)

The two presidential hopefuls (Raila and Ruto) will camp in Wiper party leader Kalonzo Musyoka’s Ukambani bedroom to impute the Azimio la Umoja and bottom-up economic plan to the great people of Makueni and Kitu respectively.

Kalonzo Musyoka who is a heavyweight One Kenya Alliance principal (OKA) welcome the two leaders although he spelt a tough warning by revealing that they shouldn’t channel their attacks to Wiper party at the height of advancing their political needs. “We know they want to use our three governors (Alfred Mutua, Kivutha Kibwana and Charity Ngilu) to pave their ways into the region. But we warn them to respect Wiper and its allied legislators” Senator Mutula Kilonzo Junior noted.