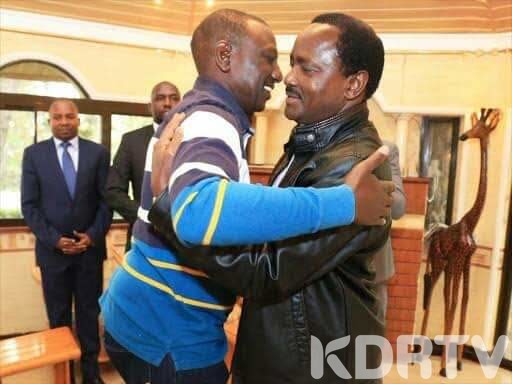 Is Wiper Leader Kalonzo Musyoka supporting Jubilee Candidate MacDonald Mariga in the Kibra by-elections? Word on the street is that the former Vice President has thrown his weight behind the former Harambee Stars midfielder, who is being pushed by Deputy President William Ruto.

According to unverified reports, the Wiper leadership led by former Machakos Governor Aspirant Wavinya Ndeti met at an unnamed location in Nairobi on Monday and asked the party’s supporters to vote for Mariga in tomorrow’s poll.

If indeed it is true that he is supporting Mariga, then Kalonzo will go down in history as the first person to support three different candidates in the same elections. On September 10, The Wiper Party announced on its Twitter Handle that it would be fielding Rapper Prezzo Makini in the by-elections.

The tweet was deleted a few minutes later. Kalonzo confirmed on his own page that indeed Prezzo would be vying for Kibra MP on a Wiper ticket but in the 2022 elections. Kalonzo later threw his weight behind Ford Kenya Candidate Butichi Khamisi. It is not clear when he ditched Butichi. Is this the reason he is called Watermelon?

During the rally, Raila announced that this was a new alliance. Political analysts interpreted this as a deliberate attempt by the former Prime Minister to sideline Kalonzo from Ukambani politics.

Kalonzo Musyoka is a undecided politician he can make 100 decisions within 2 hours, Don't take him seriously, I know he felt it when he saw Baba with Alfred Mutua, Charity Ngilu and kivuta Kibwana supporting ODM candidate Imran Okoth , itabidi azoee!!!

Controversial blogger Abraham Mutai has also claimed that Kalonzo and Ruto are in talks to form an alliance ahead of the BBI report and probably 2022 elections.

My sources have indicated that Kalonzo Musyoka has been in talks with William Ruto to form an alliance ahead of the BBI. I'm just wondering, how will the supporters of Kalonzo turn around and start singing praises for William Ruto. Politics is hard I tell you. Inataka stamina

These are interesting times for Ukambani Politics. Do you think Kalonzo has salvaged his political career?