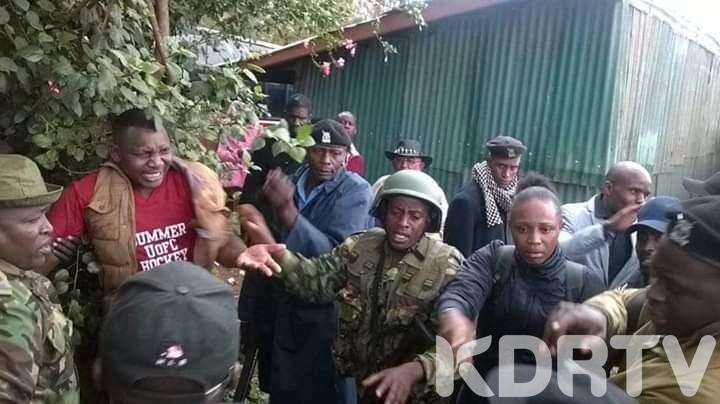 Police in Kibra have arrested a man who was allegedly bribing voters with Ksh 1000 shillings to vote for Jubilee Candidate MacDonald Mariga in the ongoing by-elections.

The incident happened at Mashimoni Squatters Primary School. The man had watts of Ksh 200 notes and was allegedly giving each voter five notes which amount to Ksh 1000 shillings.

At Mashimoni Squatters Polling Station,a guy has been rouged up after residents discovering he was bribing voters kwa line with 1000 to vote for @MarigaOfficial ..He has been arrested!#KibraDecides

An unidentified woman, who says she was a former Councillor in Kibra, showed evidence of the Ksh 1000 shillings she had received from the suspect.

There have also been unconfirmed claims that a section of Kibra residents were seen leaving DP William Ruto’s Karen residence in the wee hours of Thursday morning.

Why would hundreds of people be walking all the way from Kibra to the official residence of D.P @WilliamsRuto in Karen at this hour of the night? #ElectionNight #KibraDecides #ElectionResults2019 pic.twitter.com/WDF9HwH7jL

Blogger Abraham Mutai shared a message on social media from a man who claimed to have voted at the KMTC polling station but his finger was not marked, meaning he could vote again.

"My brother just voted at kmtc,he hasn't been marked!ODM needs to concentrate on these other areas as well.that's where the rot is!urgently.hide my identity!" #KibraDecides

Despite the bribery allegations, voting is going on smoothly in the constituency. Some polling stations started voting late after KIEMs kits failed.

4 KIEMS kits in 4 polling stations are not working, we spoke to IEBC and they have gone manual. ~ Janet Ongera.#KibraDecides @apollosilas pic.twitter.com/LOi8oFsIMd

ODM has deployed several MPs on the ground to monitor the voting in the constituency that has been branded ‘Baba’s bedroom.

The KIEMS kits being used to biometrically identify voters are working optimally. We urge all registered voters in Kibra Constituency to turn out and exercise their democratic rights #talkwithIEBC #byelection2019

The party announced through its Twitter handle that Raila Odinga and Imran Okoth would vote at the Old Kibra Primary School. Despite being a strong candidate in the race, Mariga will not vote in Kibra because he is not a registered voter in the constituency.