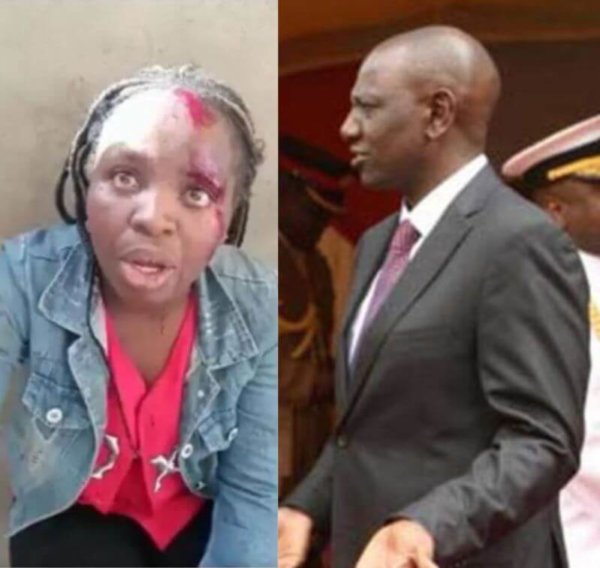 (KDRTV) – The lady in question was beaten to a pulp in Murang’a County by Tangatanga supporters after she was allegedly paid a meager KES 1000 to cause chaos ahead of Deputy President, William Ruto’s visit in the region within Central Kenya.

After being cornered and harassed by angry Tangatanga youth, the unidentified lady said they were mobilized by a woman called Caroline Njeri. Their names were written down and they were promised to be paid once they completed their task of disrupting the DP’s function. She also mentioned Sabina Chege as being the financier during the interrogation.

The disturbing video was shared by Gatundu South Member of Parliament, Moses Kuria who condemned the Murang’a County Women representative for being behind the whole saga.

“Sabina Wanjiru Chege and your masters, you should be ashamed of yourself. Why don’t you send your own daughters to cause violence? How can you misuse this innocent girl?” Moses Kuria wrote after posting the short clip.

READ ALSO: Aden Duale Tells Uhuru To His Face What Will Happen If He Fails To Save Jubilee Party

Kenyans from both sides of the political divide have commented on the video. Here are some of the most interesting reactions;

Asiyo Edward said, “Moses Kuria…do you remember the NYS Saga? Did you give your sons and daughters panga to cut those who were opposed to the NYS corruption? Violence is BAD, but stop the double speak, nobody is a child of a lesser God.”

Rooney Tarus wrote, “The Kenya we are in where we elected fools to fool the fools thinking that their foolishness will never come to daylight.”

Jonah Ngandu remarked, “Its known that this is stage managed by tangatanga….our country taking wrong direction.”

Meanwhile some Twitter users are claiming that the violence was stage-managed in an effort to tarnish Sabina Chege’s name. A young woman is reported to have lost her life during the unfortunate incident. Check out the tweet below.

A very short story on Ruto's stage managed on his PLANNED VIOLENCE in Murang'a,Kenol'The goos arrived with 5 Kenya Moya buses(owned by the Ngirici's) The woman has been paid to tarnish Sabina Chege's name. Sadly, one young soul has been killed by the goons. pic.twitter.com/offiIMI98J