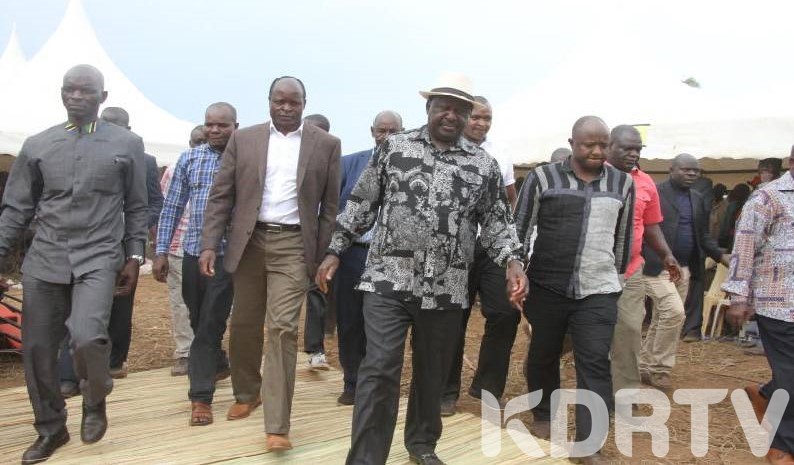 Rt Honorable Raila Odinga needs to know that he is about to cross the line. To blame Luos for the poverty in their region not the  national government official marginalization policy is tragic. That they should not rely on national government but should instead exploit the potential in agriculture, fisheries etc is myopic, is unsolicited advice.

Let me share my evaluation of  why Raila’s utterance is not based on good understanding of economics and stewardship. First of all an example of Turkana. Turkana is the largest livestock producer in Kenya but suffers famine and starvation year in year out.

It’s because of sessional paper number 10 of 1965 which declared cash crop areas to be of high potential and arid and semi arid areas of low potential not worth investing taxes in.  45 tea processing factories were then build in Mt Kenya region, Kericho, Nandi, Bomett, Nyamira and Kisii.

There is Mudete in Vihiga as well. Not a single factory was built in Turkana, Marsabit, Isiolo, Samburu, Wajir, Mandera etc to export beef and livestock products to middle East and European markets.

Remember that I have not counted the pyrethrum, coffee, milk processing , leather tanneries in Thika, fish factories in Thika etc I just gave the example of Tea alone. And someone wants us to tell Luos that it’s okay, don’t rely on national government, just now get the youth into agriculture etc ! This is what Luos’ have been doing since independence but the reward has been insults. One time Kimunya said that the Nairobi Stock Exchange is not a fish market for Raila to comment on Mobitelea shares in Safaricom that were fraudulently sold to individuals!

Luo Nyanza cotton lint  and fish processing factories were starved of capital, no roads were built there. Official marginalization of the Luo Nyanza region for 50 years is officially documented. Prof. Karuti Kanyinga has written extensively on official discrimination on the basis of ethnicity in this country. Going to Kisumu for science congress activities while in Homabay School was always a nightmare.

We could depart from school at 4am and spend three hours to reach Katito which is just 80 kms away because there was no road but dusty and rocky tracks in the name of a road.

Raila must begin from reparations for Luo Nyanza, NEP, Northern Kenya all the way to Turkana and Coast province on the basis of Affirmative Action. So that we see seven new factories in Siaya, Kisumu, Migori, Homabay, Migori, then 21 new factories in Northern Kenya, Coast and Maasai land fully funded by the state to help these regions to gain foothold in the economy; He must then demand for the writing off of debts sugar factories have accumulated;

Further he must demand for the full compensation of every single Luo the government has killed for engaging in national processes like Musando, TJ Mboya, Robert Ouko, and those killed for participating in democratic struggles including baby Pendo and Ogada who was killed in the UoN library on Saba Saba 1997 for him to purport to advise Luos or speak for them.

He must further tell his brother Uhuru to  scrap the VAT on petrol products, account for national debt that his administration has fraudulently contracted to let Kenyans including Luos do gainful business.

Raila will not continue to speak for Luos or be their advisor if it is not founded on the truth. We have a TJRC report which remains unimplemented. By the way,  Luos can speak for themselves.

Finally, can he force the governors in Luo Nyanza to use public resources for public gain not private primitive accumulation.  Where has Rt Hon Raila  been when monumental looting has been going on in Migori , Homabay, Siaya, even Kisumu before Anyang’ came to the scene? If good governance like we are seeing in Makueni and Kitui was instituted in Luo Nyanza, poverty will be history.

Could he also while at it help us in Nyamira where the ODM governor has performed miserably so far?

Subscribe to watch latests videos
In this article:Luo Nyanza, Poverty in Kenya