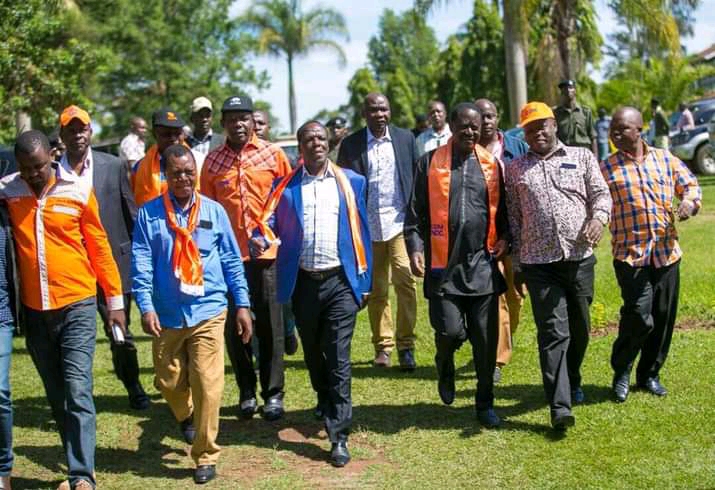 He has been heroically received by ODM longtime confidant Hon Noah Wekesa alongside his partner Saboti MP Hon Caleb Amisi.

Trans-nzioa being a food basket of Kenya when it comes to Maize farming, Raila intends to breath hopes to the local farmers and small scale business traders to connect the reality in increasing the production of farm produce and availability of market with a mouthwatering and succulent price tags.

The ailing Maize Industry which has been enjoying the breeze at its knees will be revived through injection of financial boost to drift the overflow of farm produce to the market.

The industry faced acute challenges after the government noticed improper projection of maize from Mexico into the country.  Rail is preaching the gospel of unity and peaceful coexistence among tribes and communities.

He is expected to traverse Bungoma county tomorrow, Sunday, 21st where she will be hosted by the fearless Orange Democratic Movement (ODM) party Secretary General Edwin Sifuna.

At the same time, One Kenya Alliance (OKA) chief principals (Mudavadi, Kalonzo, Wetangula, Gideon Moi and Cyrus Jirongo) will lead Uchumi Bora narrative to Mulembe nation where they will address their scanty supporters in Kitale before heading to Bungoma town.

Deputy President William Ruto is also finalizing his seven-days Mt Kenya today where he has been sanitizing the region with hustler nation slogans of bottom-up.