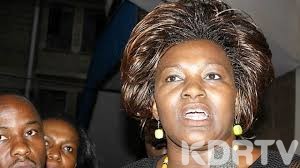 According to the leaders, Shebesh was out of order for going against the party’s agenda and challenging the flag bearer’s candidature.

Speaking during a fundraiser for a businessman who had his property razed by fire, the leaders including Bomet East MP Beatrice Kones and Senator Christopher Langat asked the party to suspend her and have her denounced from the party.

“Jubilee is for all of us and the President is the leader followed by his deputy. Going against the agenda of the party by endorsing a different candidate is illegal and warrants for disciplinary measures,” said Korir.

READ ALSO: Exposed: The Hypocrisy Of Jubilee MPs In Calling For Expulsion Of Shebesh And Kamanda From The Party

In a viral video, Shebesh was captured denouncing Mariga as the ideal candidate for Jubilee, terming the stance by President Uhuru as mere PR.

They labelled Shebesh a confused woman who moved from one party to the next seeking political mileage through cheap propaganda.

“The Jubilee party is what made you who you are. You are a confused woman who moved from ODM to Jubilee and now back to ODM only when it suits you,” said Korir.

Shebesh was put under siege although the rift indicated the differences between the leaders aligned to the DP Ruto as well as the president.