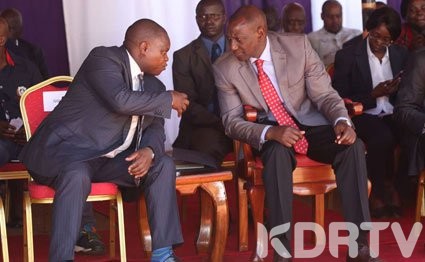 Deputy President William Ruto has intensified his 2022 top seat agenda by formulating a team to solidify matters on the ground and deliver Gusii votes.

According to the DP’s team, the tactic is to ensure the Gusii land voters are wood and secured in a plot to guarantee his win come 2022 general elections.

Sources have confirmed that the DP Ruto held a long intensive meeting with some leaders fro Kisii  county where the agenda was a do or die for vote hunting.

The meetings were held separately, with teams from Nyamira and Kisii counties and 27 ward reps from the region identified to carry out and deliver the task.

“We are working tirelessly to ensure the people of Kenya are given good leadership. The DP’s plot is in full effect and it will be witnessed when he ascends to power in 2022,” said a close ally to the DP.

Among the MPs that were in the meeting were Joash Nyamoko of North Mugirango, Vincent Kemosi of West Mugirango and Shadrack Mose of Kitutu Masaba together with more than 200 youths from Nyamira.

Although the close allies to DP Ruto have declined to make public the intentions and agendas of the meeting, it has been discovered that the team is work day and night to meet the DP’s expectations.

The Deputy President has faced backlash and challenges regarding his 2022 top seat ambitions, with President Uhuru with whom he had made the pact with turning a deaf ear on his plea.

The handshake between President Uhuru and ODM leader Raila Odinga was allegedly a plot to frustrate him and bar him from becoming president in 2022.

He has been accused of being selfish and obsessed with presidency rather than deliver what he had initially promised Kenyans being second in command after the President.

“The Deputy President is very obsessed with being President that he will stop at nothing to have the ambition achieved,” said ANC leader Mudavadi during an interview.

Ruto has recruited political leaders across the county, with Western Kenya and Gusii being the main targets.

In Western, he has frequented the region with countless trips and fundraiser, having acquired foot soldiers on the ground that run and update him on every development.

These regions were referred to as the opposition zones with Raila being most popular and ideally  bearing majority of votes during elections.

With Western Kenya already under his sleeve, the Gusii region vote hunt will be another added advantage to his statistics where he plans to lead by a huge margin.