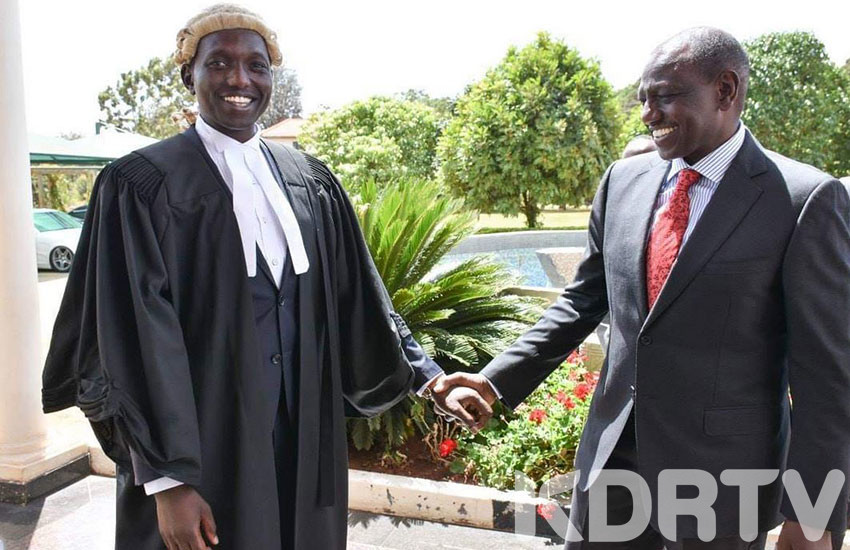 Nick Ruto, the son of Deputy President William Ruto, has raised eyebrows after making a huge donation to a church in Siaya County, the rural home of ODM leader Raila Odinga.

On Sunday, Nick was the chief guest at a church fundraiser at  Nyamasore Catholic Church in Rarieda Constituency. At least Ksh 800k was raised with Nick making a personal contribution of Ksh 250k.

In his speech, the younger Ruto who is an Advocate of the High Court steered off politics. He advised parents to bring up their children in the church.

“In order for parents to instil good values in their children, it is important to bring them up in the church,” he said.

“At the moment, there are many challenges youth are encountering and it is only through discipline and fear of God that they can overcome.”

But there have been questions about his visit to Raila’s backyard, a man considered to be one of his father’s biggest rival. Rarieda is also the home of Jubilee Secretary General Raphael Tuju. Tuju, who does not see eye to eye with the DP, was the MP between 2002-2007.

Political analysts have insinuated that the younger Ruto could be reaching out to the Nyanza youth on behalf of his dad ahead of the 2022 elections. Ruto has visited Luo Nyanza only once since the 2017 elections.

DP William Ruto often surprises me. He’s been running for President against himself the last 2 yrs & is still campaigning 3 yrs ahead of elections. His supporters claim he has won against imaginary candidates 😁 ”Ambition without knowledge is like a ship on Land” #KenyaUnderRuto

Those close to Nick intimated that he has mapped out the country, in a bid to reach out to the church and the youth. They call this ‘giving back to society’.

Despite having never stepped in a law court to represent a client, Nick is believed to be very rich. He has interests in real estate and farming.

NO known IPO or Acquisitions.

*Personal bank savings accounts found by EACC to be in excess of 1.1 BILLION KShs under his known aliases.*

In April this year, EACC cleared a firm associated with Nick for the supply of maize to National Cereals Board (NCPB). Koilel Farm which is owned by Nick and his mother was paid Ksh 19.2 million for the supply of 6,000 bags of maize.