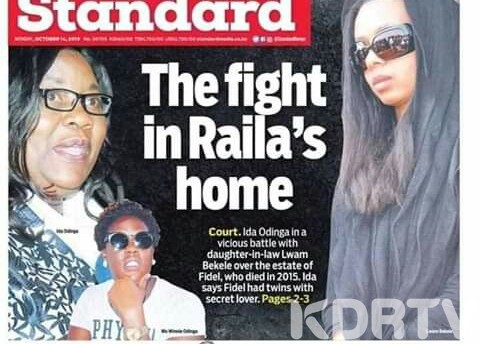 The Standard Newspaper has silently pulled down a controversial article in which it reported that there was a vicious war in Raila Odinga’s family over the property of the late Fidel Odinga.

In the story, the newspaper alleged that Raila’s wife Idah Odinga was embroiled in a court battle with Fidel’s widow Lwam Getachew Beke, over the administration of his multi-million estate.

Fidel, the eldest son of the former Prime Minister, was found dead in his bed after a night out in January 2015. The cause of death has never been made public.

He was survived by Lwam Beke, an Eritrean Beauty and a son.

The Standard in their story titled ‘The Fight in Raila’s Home’ claimed that Mama Idah and her daughter Winnie Odinga are fighting the widow over the administration of the estate.

According to the paper, the two women have objected the widow’s application to take sole administration of the estate arguing that she had locked out other interested parties.

The wife to the ODM leader told the court that Fidel had sired twins via a secret lover – and insisted that the two should be included in the estate’s subdivision.

Ida added that her daughter-in-law had not included some of the assets Fidel owned.

But the widow has contradicted these claims, arguing that the said twins were born six months after Fidel’s death and there is no evidence on their birth certificates about who the father is.

She also said that she only moved out of her matrimonial home after Mama Idah continuously made false and unkind remarks about her family, friends and herself.

The Standard had said that the steamy property story would be the headline on Monday’s but the hardcopy featured a different story. The story also briefly appeared on their e-paper before it disappeared.

The paper has not explained why the story disappeared.