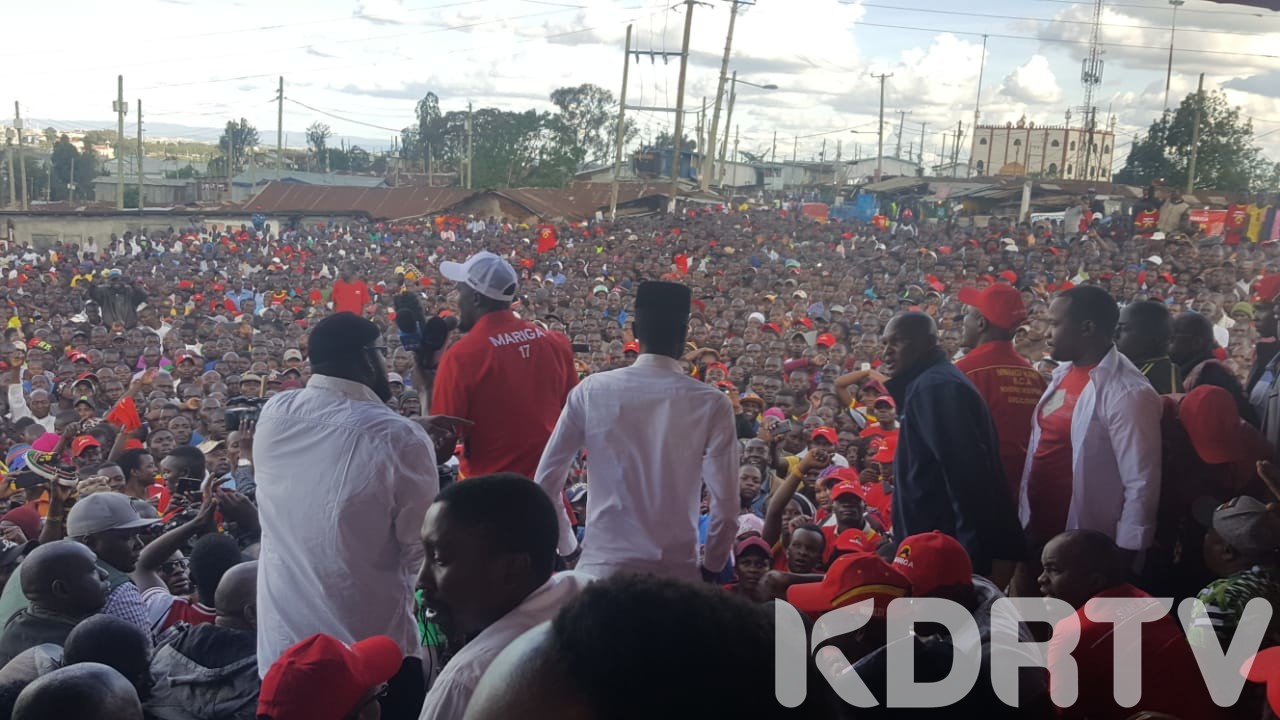 It is not every day that you see Kakamega Governor Wycliffe Oparanya on the campaign trail, drumming up support for an ODM candidate. Despite being the party’s Deputy leader, Oparanya is not a noisemaker like Babu Owino or an eloquent speaker like his Mombasa counterpart Hassan Joho.

Yet, he has been in Kibra drumming up support for ODM candidate Imran Okoth ahead of next week’s by-elections. In his speech at the Laini Saba Grounds on Sunday, the governor asked Luhyas to vote for Imran because the community is in ODM.

Majority of the politicians who attended the ODM Party at Laini Saba grounds were Luhya led by Oparanya and ODM Secretary General Edwin Sifuna. George Aladwa (Makadara),  Cleophas Malala (Kakamega Senator), Godfrey Osotsi, (Nominated) and former Westlands MP Fred Gumo were all there to drum up support for Imran.

Last week, COTU Secretary General Francis Atwoli led Imran Okoth to a meeting with the Luhya community in Kibra, asking them to vote for Imran.

The Luhya Community in Kibra today endorsed the candidature of Bernard Otieno Okoth (Imran). Deputy Party Leader @GovWOparanya led top officials and legislators from the community in a series of meetings with the Abaluhya people who said they are solidly in ODM and behind Imran. pic.twitter.com/3d4Hr87Vtw

It seems the Luhya Community will be the determining factor in the lucrative seat that fell vacant, following the untimely demise of former MP Ken Okoth, who succumbed to cancer in July.

Kibra is the most populated constituency in Nairobi with more than 100,000 registered voters. More than 60% are Luhyas and Luos. The two communities refer to each other as Mashemeji (in-law). But these elections is testing the relationship.

4/ There’s one more thing: Kenya’s politics is ethnicity based in a large measure. Mariga is Luhya and Luhyas are a sizable constituency in Kibra. Though that constituency has historically identified with ODM, its likely to test “ethnic identity” over “party loyalty”.

Four of the leading candidates in the race are from the two communities; Imran and ANC’s Eliud Owalo are Luos while Jubilee’s McDonald Mariga and Ford Kenya’s Butichi Khamisi are Luhyas.

Let's stop deceiving each other & ODM should acept this painful truth. In 2017 general election Jubilee had no strong candidate in Kibra, Ken Okoth was suported by a single coalition caled NASA that how he easily won the seat. 7th November is totaly diferent#MarigaKomboaKibra pic.twitter.com/fmk0ttpn1V

Mariga is the biggest threat to ODM first because he is being bankrolled by the ever-ambitious DP William Ruto and secondly because of his tribe.

Interestingly, the former Harambee Stars midfielder has not campaigned on the basis of being a Luhya, though Ruto has held meetings with different communities, among them Luhya to drum up support for Mariga.

On Sunday, Gumo fired a warning to Mariga asking him to stop interfering with Baba’s bedroom.

“Mariga is our son but he is trying to enter into other people’s bedroom, which we will not allow,” Gumo said

Unfortunately, the two senior-most Luhya leaders; Mudavadi and Wetangula are supporting different candidates in the by-elections, non of whom is the strongest.

If Mariga wins Kibra, then it's game over for Raila. The psychological impact of unseating Raila in his bedroom will create a mystic around Ruto that Raila once had. I told ODM guys to hit the ground running instead of exuding confidence sasa wameanza kuwika IEBC this, IEBC that.

There is no doubt that the Luhya Community will play a huge role in the outcome of the poll, but can we have a Luhya MP in Kibra?