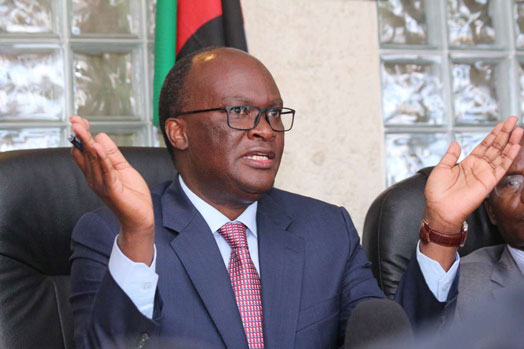 (KDRTV) – Transport CS James Macharia has been put to task to explain the logic behind appointing all members of the Kikuyu Community to the Nairobi Metropolitan Transport Board.

Macharia gazetted the names of Mary Waithiegeni Chege, Zachariah Karenge Mungai, and Ronald Ndirangu Ndegwa as members of the Board to serve for three years starting from February 10.

The CS is also the chairperson of the Nairobi Metropolitan Area commission, meaning there will be another Kikuyu on the Board.

Kenyans on social media have questioned the appointment, with some people asking the CS to explain the rational behind the move.

And remember, the Chairperson Nairobi Metropilitan Area Council is James Macharia. We are uniting kenya. 😂

“CS Macharia, it is immoral to appoint Chege, Mungai & Ndegwa as members of the Nairobi Metropolitan Transport Authority Board, cap the appointments with a Kenya Gazette Notice then expect Kenyans to praise you for the ‘good work’ you are doing at your Ministry,” Lawyer Silas Jakakimba posed on Twitter.

President Uhuru Kenyatta has been very vocal on the BBI report, promising that it will help create an inclusive country.

But how can Kenyans believe that when simple things like appointing members of a public board are so biased? Does the government have the goodwill to create an inclusive nation?

Subscribe to watch latests videos
In this article:Headlines, James Macharia