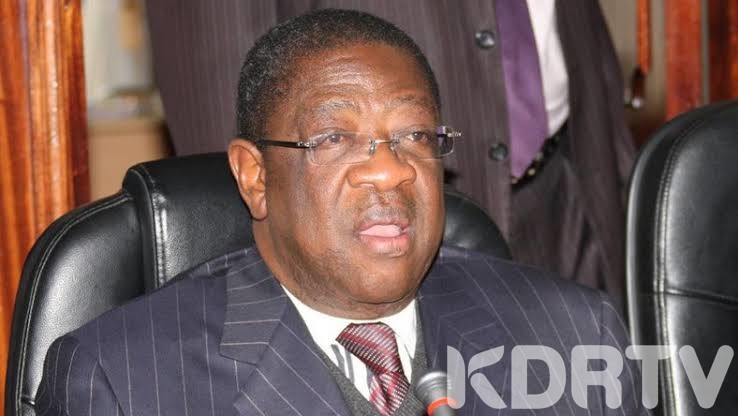 Embattled Busia Senator has dared the US government to table the evidence linking him to corruption.

The US Secretary of State Michael Pompeo announced on Monday evening that Wako had been barred from going into the USA ‘due to his involvement in significant corruption.’ His wife Flora Ngaira and son Julius Wako are also affected.

But Wako has dared the Trump administration to provide evidence on the real evidence that he was involved in corruption during his time as Attorney General between 1991 and 2011.

“I am against corruption and I believe I as an individual and the people of Kenya as a whole are entitled to full disclosure of general allegation of corruption against me,” he said during a Press Briefing at  Parliament Buildings on Wednesday.

The ODM lawmaker further said that linking his wife and son to the case was malicious.

Amos Wako: The mention of my wife and son was in bad taste#LeoMashinani pic.twitter.com/Q1LLBC1mHX

Wako was first barred from travelling to the US in 2009 as the Obama government accused him of deliberately blocking political reforms in Kenya following the post-election violence in 2008. But the decorated lawyer who is part of the BBI taskforce and played a crucial role in writing the 2010 constitution claims it took more than six months for the US to respond to those allegations.

Amos Wako: It took 6 months for my lawyer to receive a reply when he requested to know why my visa had been revoked in 2009 by the US#LeoMashinani pic.twitter.com/l9JyJmVWPK

“After my lawyer contacted the US Embassy on why my visa had been denied, the reply was that they were unable to provide any information on our request,” he said.

He has asked the people of Busia not to demonstrate over the allegations, saying it is a small thing and he can deal with it.