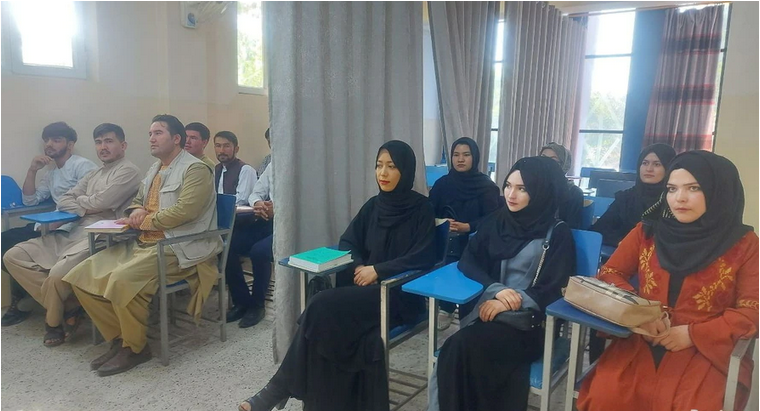 A segregated classroom where males and female students are separated

KDRTV NEWS: Universities across Afghanistan have reopened amid concerns of extreme Islamic laws against female students.

The universities are reopening after the Taliban took over Afghanistan following the withdrawal of the American troops in the country.

There are cases in where female students have been separated from males students by curtains or bards in the middle of the rooms.

However, the foreign powers are saying that they will closely watch what is happening in universities and schools across the country with regards to how the Islamic rules will impact the rights of women in the country.

Many Afghans had fled the country fearing the implementation of extreme Islamic laws.

University classes under Taliban in one of the university in #Kabul #Afghanistann pic.twitter.com/yMkBC35UsK

The giant world power has also said that the vital aid and recognition of the Taliban will depend on how they would run the country including their treatment of girls and women.

When the Taliban last ruled from 1996-2001, they banned girls from schools and women from university and work.

However, in recent weeks, the group said that women’s rights would be honored in their government.

It is unclear if the Taliban will keep to their promise

There are reports that female students are currently being segregated in classes, taught separately, or restricted to certain parts of the campus.

KDRTV spoke to female students from Kabul, Kandahar, and Herat cities and they have also confirmed the claims.

“Putting up curtains is not acceptable,” a female student complained

“I really felt terrible when I entered the class … We are gradually going back to 20 years ago.”

However, the Taliban spokesperson did not recommend images of segregated classrooms across Afghanistan.