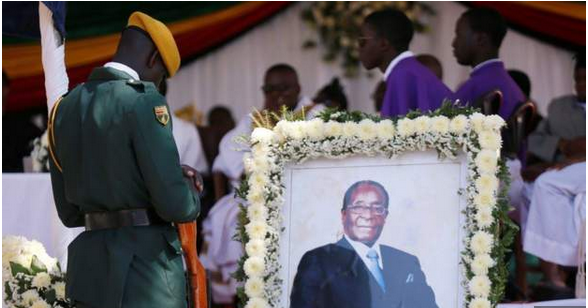 KDRTV NEWS: A court in Zimbabwe has allowed the body of the former President Robert Mugabe to be exhumed after a traditionalist leader said his burial violated the cultural practices.

Mugabe died aged 95 in 2019 and was buried in a courtyard of his family homestead.

A local court thus ruled that the people permitted to exhume his body can proceed.

“I give powers to those who are permitted by law to exhume the late Robert Mugabe’s remains from Kutama and rebury them at the National Heroes Acre in Harare,” a copy of the ruling in the local Shona language quoted by Reuters said.

The rule was condemned by Mugabe`s family who challenged the rule but the magistrate dismissed the challenge.

The family is reportedly likely to appeal in High Court

Mugabe led Zimbabwe from independence in 19980 to 2017 when he was ousted.

The family said the former President was bitter after the ouster and said that he did not welcome the option to bury him at the national shrine.

The traditional chief ordered that the remains of the former late President be exhumed and buried in the national cemetery.

A tradtional court had order Mugabe`s wife to give way five cows and two goats for having buried her husband contrary to traditions in the country concerning he was head of the country.

The family had rejected the ruling and are set to appeal saying that the chief Zvimba lacks jurisdiction over Kutama and specifically on the matter.