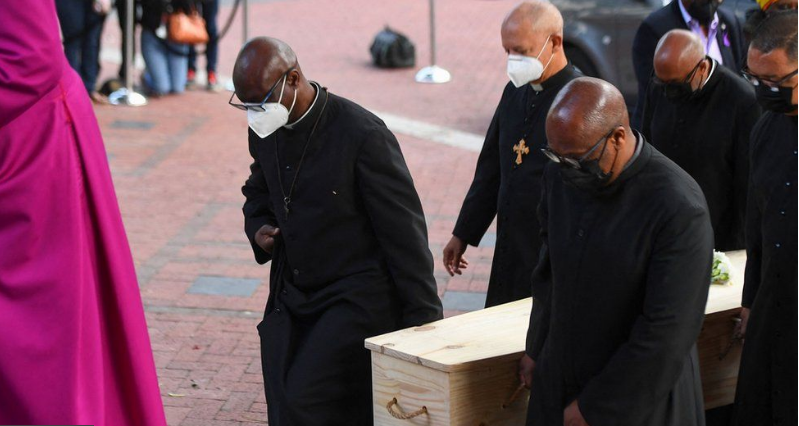 KDRTV NEWS: The body of the later Archbishop Desmond Tutu has arrived at his old St George`s Cathedral in Cape Town, where it will lie for two days.

Tutu had won a Nobel Prize after helping South Africa to end the apartheid rule; he died aged 90.

The official state funeral will be held on 1 January after the lying-in-state period to allow mourners to pay their last tribute.

A large crowd is expected to visit the Cape Town Cathedral over the two days.

According to our correspondent in South Africa, priests burnt incense as Tutu`s body was carried in a simple wooden coffin into the Cathedral

Tutu`s window, Leah could be seen strolling behind as the casket entered the former parish

South Africa will remember Desmond Tutu as a nationalist who helped the black majority to fight the apartheid system from 1948 until 1991.

Memorial services will be held across South Africa.

After Sartudays funeral, Tutus body is cremated, his ashes will be placed in the Cathedral.

The funeral will be very simple according to his wishes

“He wanted no ostentatiousness or lavish spending,” his foundation said, adding that he even “asked that the coffin be the cheapest available”.