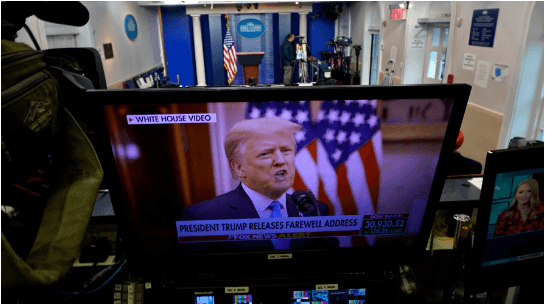 (KDRTV)-President Donald Trump has sent best wishes to his successor Joe Biden in a video statement.

However, interesting enough, in the entire video statement, Trump did mention Joe Biden by name.

“This week, we inaugurate a new administration and pray for its success in keeping America safe and prosperous,” said Trump in the video statement.

“We also extend our best wishes. And we also want them to have luck — a very important word,” he added

During the statement, he did not forget to assert some of his fundamental achievements.

However, according to our previous reports, Trump had accused China of releasing coronavirus to compel the global economy; he termed coronavirus as a bioweapon.

KDRTV also understands that Trump made history as the first American President to be impeached twice.

Trump has faulted the previous November`s elections in which Joe Biden won both popular and electoral votes.