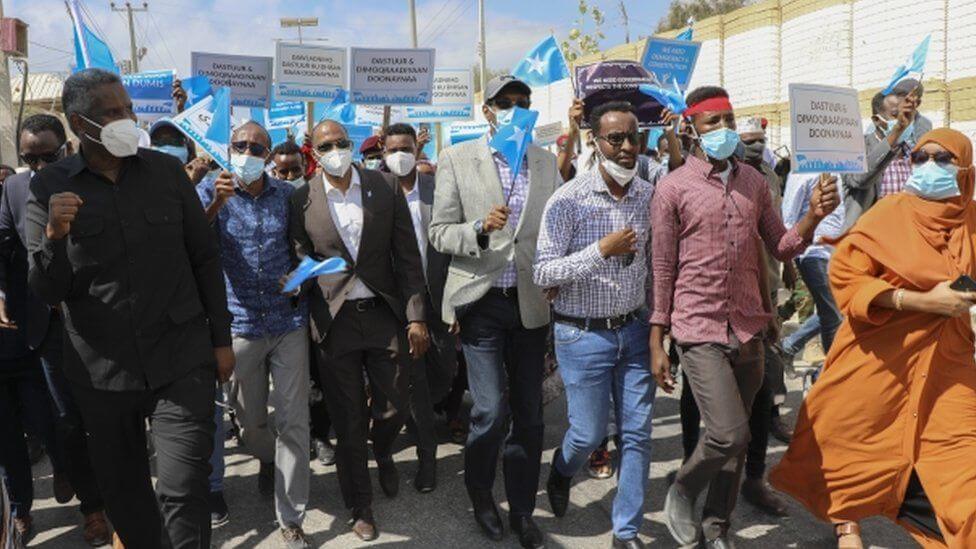 (KDRTV)-Heavy gunfire has been heard in the Somali capital as opposition leaders organized rallies against delayed elections.

The opposition leaders have dismissed the public gathering ban by the Somalian authorities.

Somalia as a country was thrown into crisis after the term of the incumbent President expired last week and no clear course of a coming election has been established.

According to reports by the government, the militiamen attacked army bases in Mogadishu, few meters away from the government palace.

KDRTVhas established that many roads in the city have been barricaded and heavy security deployed.

There were initial plans that President Mohamed Abdullahi Mohamed to meet five Somali regional presidents as a way of solving the crisis. However, according to BBC reports, only one regional president has reported to Mogadishu.

The heavy gunfire has prompted main airports in Mogadishu to be closed and flights suspended.

Many shops have been damaged and as well as other properties.

The gunfire broke when the opposition leaders and protesters were on the main airport road.

Reports allege that the authorities fire the shots in the air to disperse the protestors.

“Many forces heavily attacked us. I am now on my chest in an alley,” one protestor told BBC News

There are reports that there was also a heavy exchange of fire between the security forces and the armed guards protecting opposition supporters.

The UN has disclosed that it is concerned about the clash between opposition and security forces last overnight and on Friday morning.

Somalia has not held one-person, one-vote since 1969 due to conflicts that have run over decades.