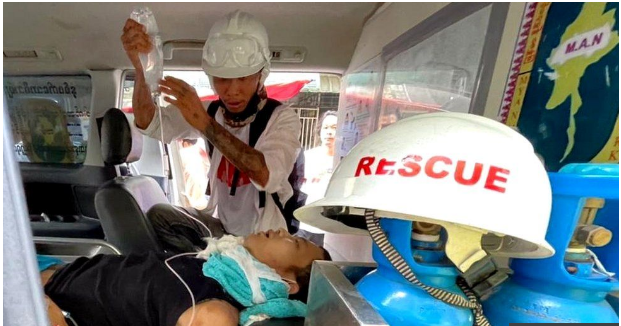 (KDRTV)-Police have fired on protestors leaving 18 for dead, the UN human rights reports on the deadliest day of anti-coup protests in Myanmar.

The deaths were reported in several cities, including Yangon, Dawei, and Mandalay, as police resolved to use live rounds and tear gas on protestors.

The police lately decided to use violent crackdown on protestors after massive protests against the military coup in the country.

This is after the military coup leaders declared a one-year-long state of emergency.

The military claimed that the previous elections were fraudulent despite the electoral agencies’ confirmation that there were not fraudulent cases.

The elected leader Aung San Suu Kyi, among other leaders, was overthrown and detained.

Footages from various scenes in Myanmar showed protestors running away from the police while others were being led away covered in blood.

The police decided to use a violent crackdown to neutralize the civil disobedience campaign.

Despite the shootings, the protesters did not leave the streets; rallies continued.

The UN Huma Rights Office faulted the protesters’ shooting and said that it had evidence that at least 18 people have been shot dead.

“The people of Myanmar have the right to assemble peacefully and demand the restoration of democracy,” spokesperson Ravina Shamdasani said. “Use of lethal force against non-violent demonstrators is never justifiable under international human rights norms.”

Many countries and international communities had imposed severe sanctions on military coup leaders.

The bodies have also compelled for the release of Aung San Suu Kyi who has not been seen in public since she was detained in the capital Nay Pyi Taw as the coup began.