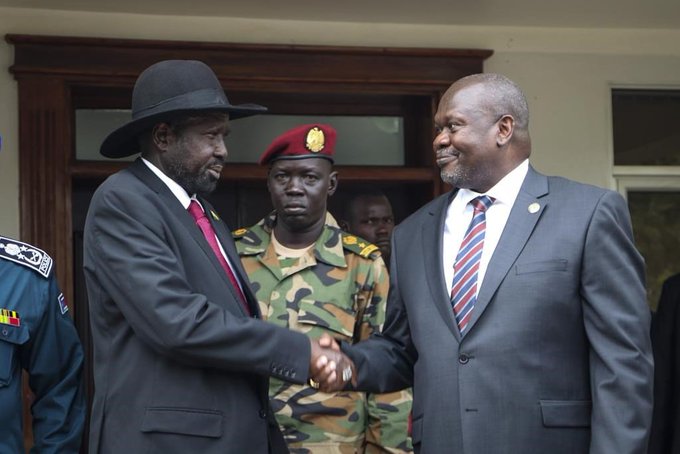 President Kiir and his vice Machar have reached peace agreement

The agreement was signed on Sunday in the capital, Juba, after intervention by neighboring Sudan.

According to the deal, the opposition commanders will be integrated into the armed forces.

President Kiir’s faction will have 60 percent representation in key positions in the army, police, and security forces.

Mr. Machar’s SPLM-IO and other opposition groups will occupy 40 percent.

The opposition has been given one week to submit the names of their commanders.

According to the peace deal, the deployment phase will not exceed one month.

“People of South Sudan are yearning for peace and peace is about security and today we have made a milestone in that. We have agreed that we shall be moving forward,” said Major General Martin Abucha, who represented Mr Machar’s faction.

“I want to call on my colleagues from the other sides that it is important to silence the guns so that South Sudan can prosper. Let there be not fighting, let there be no attacks,” he added.

The Intergovernmental Authority on Development (Igad) has applauded the deal as a breakthrough.

AFP: In what has been hailed as a major breakthrough, #South_Sudan's President #Salva_Kiir and his rival, Vice President #Riek_Machar, sealed an #agreement Sunday on a key #military_provision in a stuttering #peace_deal and vowed to silence their guns. pic.twitter.com/kFXXJ5LBZL