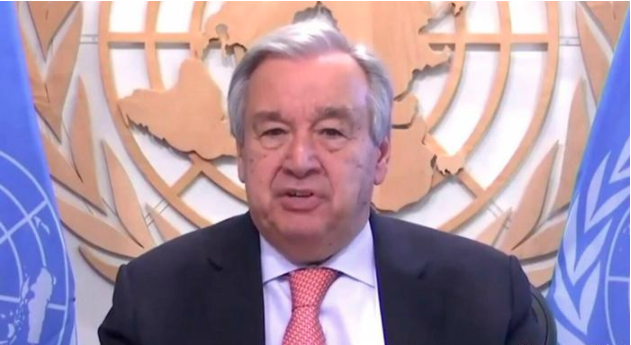 In his statement to the UN Security Council, seen by KDRTV, Mr. Guterres said nothing can warrant the fate of refugees and migrants detained in Libya.

He has thus urged the Libyan authorities to liaise with the UN agencies to perceive their commitments under international law and shut down all the facilities.

According to the statement, more than 2, 780 people were detained in Libya until the end of July 2020 at the camps.

The UN in the statement also disclosed that 22 percent of the detainees were minors. Guterres affirmed that children should not be put in detention more so when they are separated from their parents or guardians

He, therefore, asked the Libyan government to safeguard children until a long-term solution is established

The UN has also raised concerns over torture, assault, disappearance, and sexual harassment at the refugee or the detention facilities

The statement also unearthed the health and food crisis at the facilities and that some men were compelled to call their families to pay compensation to groups that were detaining them.

At the same time, Guterres also fretted about reports that some migrants and refugees were fatally shot; such incidents have resulted in severe injuries even sometimes deaths

Guterres also raised eyebrow that some migrants and refugees are forced to work at weapons depot by illegal groups.

The UN official also made a reference to 50 refugees who were killed in an airstrike in July 2019 where several others were injured at a migration center near the capital Tripoli. So far, no one has been held accountable for the brutal incident

KDRTV understands that Libya has been thrilling in a stand-off since the assassination of the country`s former ruler Muammar Gadaffi in 2011. Therefore, opposition leaders have been battling to clasp to power