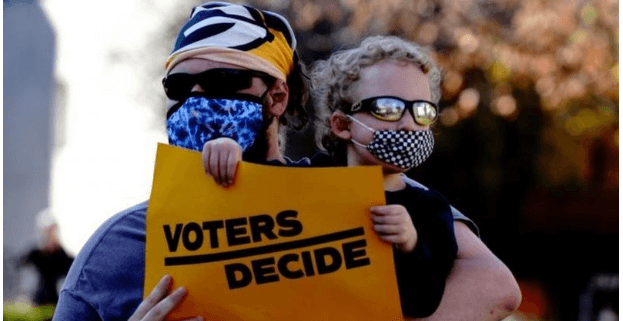 (KDRTV)-President Donald Trump has suffered another critical blow after the US federal election officials dismissed his fraud claims.

According to the officials, the 2020 White House vote was the “most secure in America American history.”

“There is no evidence that any voting system deleted or lost votes, changed votes, or was in any way compromised,” the committee announced.

The officials’ sentiment emerged after Trump asserted without proof that 2.7 million votes for him were deleted in the last week`s elections.

KDTV understands that Trump is yet to concede to the projected winner, the Democrat Joe Bidden.

Despite the projection, some votes are still being counted.

Trump has bestowed a legal challenge on the projected result, especially in the key states claiming that the voting process was marred with fraud.

So far, the Department of Homeland Security unit tasked to safeguard the election has issued a joint statement on Thursday.

“While we know there are many unfounded claims and opportunities for misinformation about the process of our elections, we can assure you we have the utmost confidence in the security and integrity of our elections, and you should too.

“When you have questions, turn to elections officials as trusted voices as they administer elections,” said the committee of the Cybersecurity and infrastructure security agency (Cisa)

According to Reuters news, the head of Cisa, Christopher Krebs, has stated that he expects to be fired by the Trump administration.

KDRTV understands that Cisa assistant director Bryan Ware had stepped down on Thursday. The White House asked for his resignation beginning this week.

On other news, former President Barack Obama, a Democrat, said that senior Republicans were undermining democracy.

“It’s one more step in delegitimising not just the incoming Biden administration, but democracy generally, and that’s a dangerous path,” he told CBS News ahead of the release of his new memoir, A Promised Land.

Eyes are now projected at the US judicial system to decide the claims raised by President Donald Trump.

READ ALSO: US peaceful Transition in Limbo as Trump and allies refuse to hand over power to Biden

So far, Pope Francis had spoken to Joe Bidden and offered him a blessing as the 46th President of the United States.