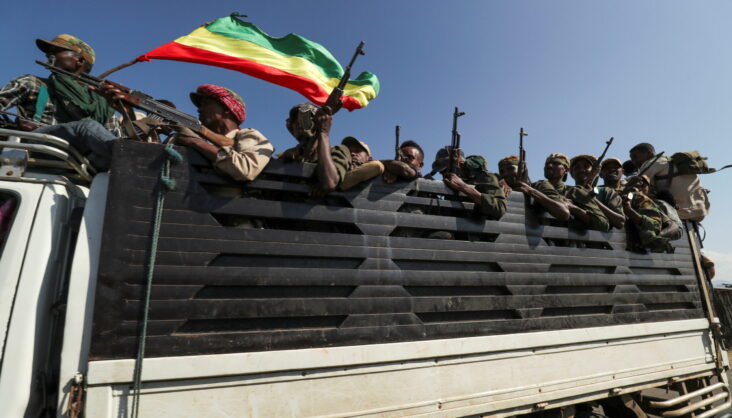 Militia involving in the battle in Tigray region

KDRTV NEWS: the United States is et to send a special envoy to Ethiopia to end the war in Northern Tigray that has spiraled to other regions.

President Joe Biden has asked the special envoy to the Horn Of Africa, Jeffrey Feltman, to return to Ethiopia at what is referred to as a critical moment.

“Months of war have brought immense suffering and division to a great nation, that won’t be healed through more fighting,” said the national security adviser Jake Sullivan.


The special envoy in a special trip will be travelling to Ethiopia , neighboring Djibouti and the EUA in a period of ten days.

The trip’s main aim is to promote peace and stability in the region, said the US Department of State in a statement.

Jeffrey Feltman, the US special envoy for the Horn of Africa, will visit Ethiopia on an August 15-24 trip that will also take him to Djibouti and the UAE@AFPAfrica https://t.co/gBIGLEWpC7.

This new development has come amid the ongoing battle between the Tigrayan rebels and the Ethiopian army and its allies which recently spiraled to the regions of Afar and Amhara.

The war has compelled more than two million people to flee their homes, with hundreds of thousands pushed into famine conditions.

The war interfered with the countries recent parliamentary elections, which were suspended in the Tigray region.

During the recently escalated war, the international community called upon the Ethiopian government to cease to allow peaceful negotiations and humanitarian assistance in the country.

The rebels took advantage of the withdrawal of the Ethiopian troops in the regions and allege that they won the war.

The ongoing fights have also led to the deaths of several people in the regions, and many people are currently facing starvation.

It is not immediately clear if the US will deploy troops in the region to help fight the rebels.