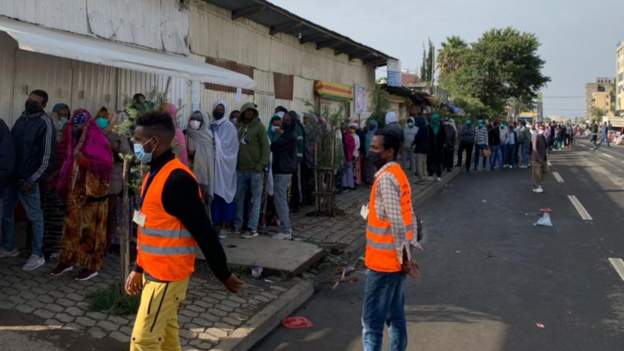 KDRTV LIVE! Ethiopians go to elections for the first time since 2015 amid Tigray conflicts

KDRTV has established that even before the recently Tigray conflict previous ethnic clashes led to displacement of close to two million people in Ethiopia.

Latest updates from the Ethiopian elections will be updated here…

The countries election agency who spoke to KDRTV said that they were waiting for the candidates` representative before voters could begin the process.

Reports indicate that the polls are not being held in Tigray which is considered to be a war zone.

Many voters in the country are concerned about their security during a closely watched elections.

Many people are also concerned about the absence of opposition in Oromia where the prime minister runs.

At the same time, the Prime Minister Abiy Ahmed said that the elections will be peaceful

Despite the security concerns, many queues were witnessed along various cities in Ethiopia.

Out 50 million eligible voters, some 37 million registered to vote out.

The US has raised concerns that excluding many voters risked confidence in the process.

Logistical issues and security concerns prompted delays in other parts of the country.

KDRTV understands that the polls had been postponed twice.

Last year, the polls were postponed due to the Covid pandemic.