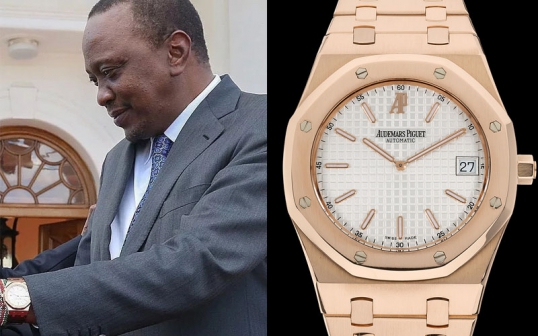 The head of state was also spotted with the same watch on Tuesday, March 8 when he ordered a mass crackdown on bodaboda operators following an incident that occurred on Forest Road, Nairobi last week.
The timepiece is not new in Uhuru’s watch collection as he has been seen wearing it on a number of occasions, including the 2019 Mashujaa Day celebrations in Mombasa.

The watch’s main features include a perpetual calendar and a tourbillon, as well as a flyback chronograph with an outsized date display and an in-house caliber.
One distinctive characteristic of the Datograph, is the way the minute counter’s hand hops from one minute to the next, allowing you to read exactly how many minutes have passed during timing. On many chronographs, the hands on the minute and hour counters are always moving.

The Datograph’s dial is available in black, gray, or silver, with two or three subdials depending on the model. At 12 o’clock, there’s a huge date. Around the border of the dial is a tachymeter scale, which is used to measure speed over a specific distance.

The Perpetual Tourbillon is a limited-edition watch with a price tag of $307,000, which is approximately Ksh34.9 million.

Other timepieces seen on the President include a Patek Phillipe Aquanut, a Cartier Santos 100 Carbon, a Rolex Oyster, and an Arnold & Son HM Perpetual Moon.