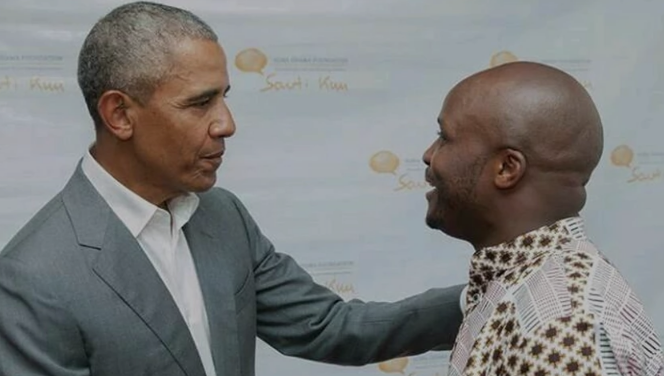 Radio host Jalangó is among the lucky few who got a chance to work and interact with former US president Barrack Obama.

Obama had travelled to his ancestral village in 2018 to launch the Sauti Kuu Resource Centre founded by his sister Auma Obama.

That moment, according to Jalangó, was one of the proudest in his career as it marked his hard work in the industry.

Explaining how he landed the gig, Jalas said it simply started as a joke.

“The news about Obama coming to town was all over; and I told Jeff, on the Jeff and Jalas show on Hot 96, that I would host the event, merely as a joke,” he said.

“Later on, the team from Gina Din Events watched the recorded show and I was called by Lorna Irungu Macharia, the group MD Gina Din Events. Lorna told me: ‘Do you know some dreams come true?’

“I asked her: ‘What dream are you talking about?’

“She went on to tell me that Gina Din Events was handling Obama’s PR in Kenya and I was the chosen emcee.

“Sometimes what you say is powerful because you never know who is watching or listening, the tongue is very powerful,” Jalang’o said.

Asked how much he charges for local events such as Madaraka Day which he hosted recently, Jalas said he takes nothing less than half a million.