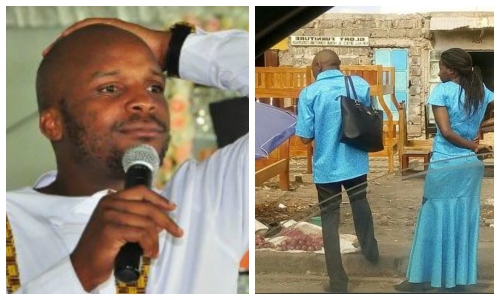 Kiss 100 presenter Jalangó believes carrying your woman’s handbag, regardless of its size, is something men should avoid doing completely.

The presenter, while speaking on his show, said that he can’t carry his wife’s handbag no matter the situation.

“There are things a man should never do,” argued Jalas.

“Anything that depicts the boychild as struggling is what you say the boychild is winning? Never carry a woman’s bag. You have no business carrying the bag as you cannot use the content inside it. Just carry your wallet.”

Jalango also argued that women like bringing things that they don’t want to end up carrying in the end.

READ ALSO: Photos Of The Curvy Former Governor’s Side Chick Who Claims She Was Raped At Jevanjee Gardens While Pregnant

He gave an example of how women end up removing their heels and then ask men to carry them, which is wrong.

“Imagine a woman decides to go to an event in heels and she gets tired and ends up removing them. So you guys are walking to the car and you see a man carrying the shoes. A man should not carry his woman’s shoes.” he added.

The discussion on whether men should carry their women’s handbag has been a hot topic in Kenya for a while now.

In 2017 the then Education PS Collete Suda, Defence CS Raychelle Omamo and her Gender Affairs colleague Sicily Kariuki hit the trending lists after their bodyguards were pictured carrying their bags.

The move brought about mixed reactions as many said it was demeaning and frustrating. Others, however, saw no problem in the move.

The argument became such a hot topic that it forced the then Police spokesman Charles Owino to clarify that it’s not illegal for bodyguards to carry handbags for their bosses.

” Let us not perpetuate discrimination against women. If the same police officers carry briefcases for men, why then can’t they carry handbags for women? If you can guard someone’s body what is wrong carrying someone’s bag?” Owino said.