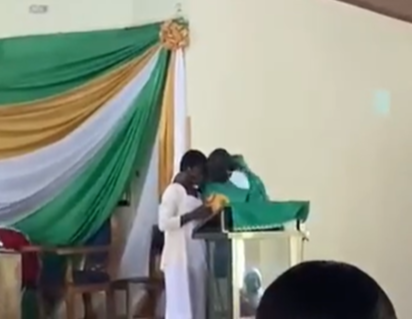 There has been outrage online after a priest was filmed kissing female students during a church service in school.

The video, which has gone viral, shows a priest in Ghana standing on a pulpit and kissing three girls one after the other as they walk by him.

The incident happened last Sunday at St Monica Collage of Education in Ghana. According to reports, Obeng Larbi, the priest, kissed the students as “a show of appreciation”.

I’m so disgusted and grossed out. How is this happening in educational institutions??? I wonder what this “Reverend Father” be doing to the girls behind closed doors.

“Reverend Father kisses three students in front of the whole school. This Anglican priest should be arrested. Shame,” a user said on social media.

“I’m so disgusted and grossed out. How is this happening in educational institutions?” added another.

Holy kiss from the priest to students of St.Monica’s college of education. Ghana we dey eih 😌 pic.twitter.com/23W0YWHX6d

One of the students said that the priest never thought the video will be posted online. The girl said that he forced the kiss and they were very uncomfortable.

“We were not comfortable with the situation, that’s why we were shouting. This is the first time he’s doing this,” she said.

“He gave the school chaplain a kiss and then did (the) same to the three female Bible readers. The third girl the father kissed is a virgin and that’s why she gave her cheek to the father to kiss but he forced and kissed her lips.”

READ ALSO: “My Daughters Were Forced To Clap And Watch As Truck Driver Defiled Me” Lady Narrates Shocking Ordeal

According to BBC, the Anglican Church is already investigating the matter and the priest will be punished.

The church also said that counseling is also to be offered to the young women “to avert any psychological issues that may arise,” says George Dawson-Ahmoah of the Anglican Diocese of Koforidua.