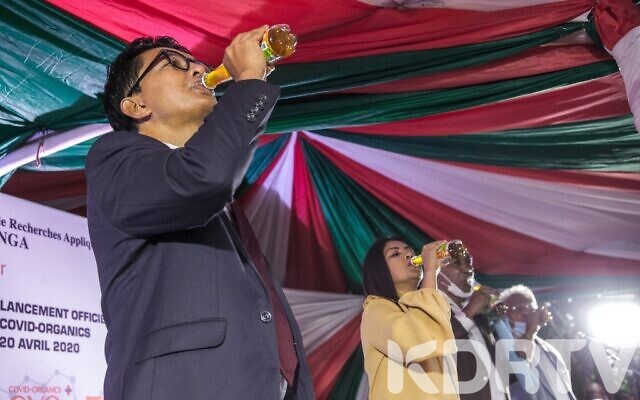 Madagascar says their COVID 19 tonic despised becuase it is African

According to the president, the tonic issue illustrates West`s attitudes towards Africa

“If it was a European country that had actually discovered this remedy, would there be so much doubt? I don’t think so,” President Rajoelina said during an interview with French news channel

KDRTV understands that so far, Madagascar has confirmed 193 positive cases of coronavirus with no fatalities reported

According to reports revealed by presidential aide to BBC, the tonic was tried on less than 20 people over three weeks which is contrary to the guidelines set by WHO.

Despite the fact that the tonic has not been proved clinically, many African countries including Nigeria, Equatorial Guinea, Liberia and Guinea Bissau have already procured the Covid-Organics

“African scientists… should not be underestimated,” said the president

However, there is no peer-reviewed data to reveal the efficacy of the newly invented COVID-19 tonic

KDRTV also understands that WHO has held a meeting with 70 expert of traditional medicine from Africa and agreed that clinical trials are still of crucial value.

They unanimously agreed that clinical trials must be conducted for all medicines in the Region, without exception. pic.twitter.com/fCKYiYiMqb

Julius Sello Malema who is a South African politician who is a Member of Parliament and the leader of the Economic Freedom Fighters has severally lit the social condemning the European countries for looking down upon the herbal medicine since it is manufactured in Africa.