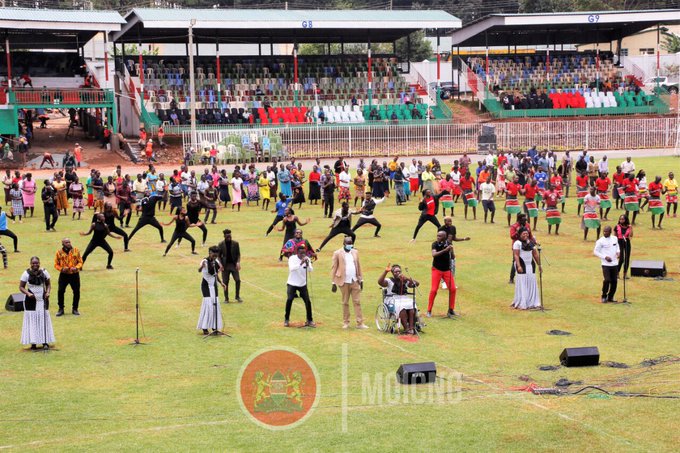 Entertainers Reherse ahead of Mashujaa Day Celebrations in Kisii

(KDRTV) – The whole country switches its attention to the fast-growing Kisii Town for the 57th Mashujaa Day celebrations on Tuesday.

All hotels have been booked to capacity. KDRTV understands that some hotels were full as early as on Wednesday last week.

Interior PS Karanja Kibicho announced on Monday that preparations were complete and the county is ready to receive President Uhuru Kenyatta and the entire National government.

Unlike previous celebrations where Kenyans from all walks of life are allowed at the venue, only 3500 people will be allowed at Gusii Stadium due to COVID-19.

“Although the facility (Gusii Stadium) has a sitting capacity of 25,000, only 3500 people will be granted entry to ensure strict adherence to
physical distancing guidelines under prevailing circumstances,” Kibicho said on Monday.

Fine-tuning preparations for Mashujaa Day celebrations at Gusii Stadium tomorrow. Although the facility has a sitting capacity of 25,000, only 3500 people will be granted entry to ensure strict adherence to @MOH_Kenya physical distancing guidelines under prevailing circumstances. pic.twitter.com/Z11pIgwb4a

No vehicles will be allowed into Kisii town, with the government diverting traffic from different routes to other locations. Vehicles from Kisumu/Oyugis will drop off passengers at Daraja Mbili Primary School, while passengers from Nairobi/Keroka will alight at Kereri Girls.

Motorists from Migori will have to leave their vehicles at Nyanchwa Primary School. If you access the town from Kiligoris, you won’t be allowed past Kisii University. All vehicles from Nyamira will park at Jogoo Primary.

Residents will get to watch a high profile match between FKF Superleague side Shabana FC and FKF Giants AFC Leopards. Shabana fans have petitioned President Kenyatta to buy their team a bus. We hope he has gotten the message.

This is the AFC Leopards squad that has set for a 12-day intensive pre-season camp in Rift Valley: