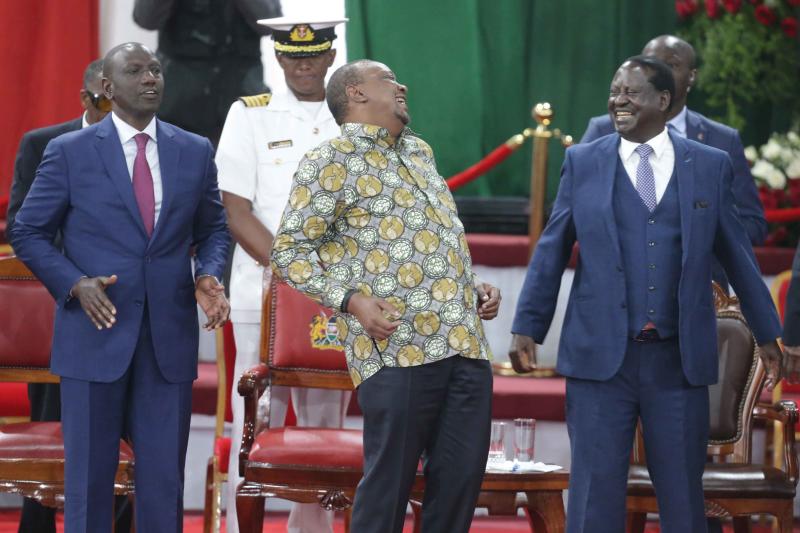 (KDRTV) – President Uhuru Kenyatta and ODM leader Raila Odinga have drafted a section of governors to push for referendum campaigns.

The duo believes that the only way to succeed in the push to change the constitution is to use regional blocks and respective leaders. Ahead of the launch of the BBI report in the coming weeks, the two leaders have come up with regional campaign teams, some of them headed by Governors.

In the Western Kenya block, the handshake team is banking on the efforts of Kakamega Governor Wycliffe Oparanya. The council of Governors (CoG) has been working closely with Devolution CS Eugene Wamalwa to sell the handshake to the Mulembe nation.

Kirinyaga Governor Anne Waiguru was the face of BBI in Mt Kenya. It is not clear if her recent clash with the County Assembly will necessitate a replacement. Waiguru is also on the radar of the Ethics and Anti-Corruption Commission (EACC). Before the COVID-19 pandemic, the former DeBBvolution CS had been tasked to work with Agriculture CS Peter Munya to popularise the BBI in Central Kenya.

Read Also: Was Babu Owino Paid To Campaign For Mariga In Kibra?

The handshake team trusts that Mombasa Governor Hassan Joho can popularise the report in the Coastal region. Joho is the de facto Coastal Kingpin and likes to be called Sultan. However, he will have a hard time selling the report if the region is denied funds in the proposed revenue sharing formula.

Kitui Governor Charity Ngilu has been tasked with rallying the Ukambani region to support the referendum calls. Ngilu has an easier task on her hands compared to her Elgeyo Marakwet counterpart Alex Tolgos who has to popularise the report in Rift Valley.

Subscribe to watch latests videos
In this article:BBI Report, Headlines