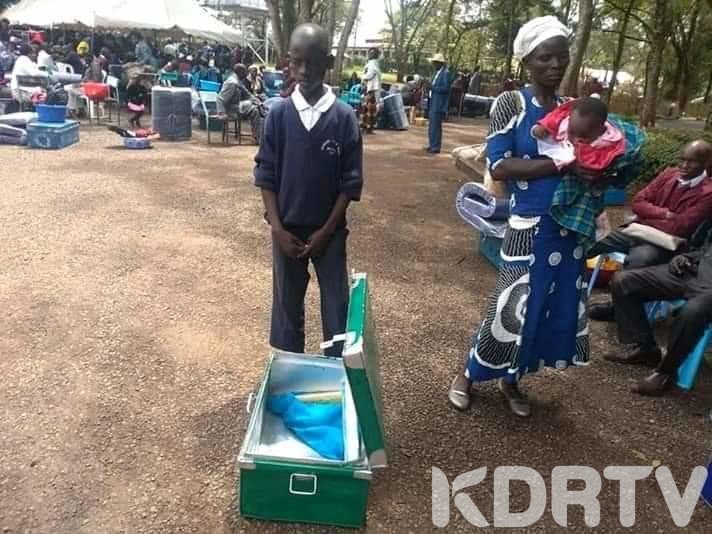 (KDRTV) – In late December, several blogs reported about a 2019 KCPE candidate who had penned down a suicide note after it emerged that her parents would not afford her secondary school fees.

The 13-year old girl from Nyalenda slums, in Kisumu garnered 391 marks in KCPE and secured a place at the Prestigious Asumbi Girls High School. Several celebrities including Babu Owino who was raised in Nyalenda and Akothee have pledged to sponsor the girl’s education.

On Sunday, 14-year-old George Ingatwa trekked for more than 70 Kilometers from his home in Nandi County to Kakamega High School where he had been admitted after scoring 390 marks. The barefooted boy had nothing but a letter from his mother and thirst, thirst for education. The Principal of Kakamega School has taken up the case and we are aware that the boy is getting help.

The country was also treated to another sad story when a boy reported for admission at Kanga High School with an empty box, with only two bars of soap. Still in Nyanza, a woman and her daughter have pitched camp at the Siaya County Referral Hospital hoping to raise form one school fees through selling their blood. They had not secured any customers by the time we filed this story.

These are a few examples from the extreme cases in the ongoing form one admission process.

This year alone, the government has awarded more than 9,000 scholarships to bright students from poor backgrounds. All county governments have a scholarship kitty while the Constituency Development Fund (CDF) is primarily meant to support education.  Several corporates like Equity Bank and Safaricom are also running independent scholarships.

Who are the beneficiaries of all these bursaries? Magoha has said on several occasions that he wouldn’t be who he is today if he hadn’t received support from Mzee Jomo Kenyatta. A time has come for the government to critically look at how bursaries are being awarded at the grassroots so that only deserving students get to benefit.