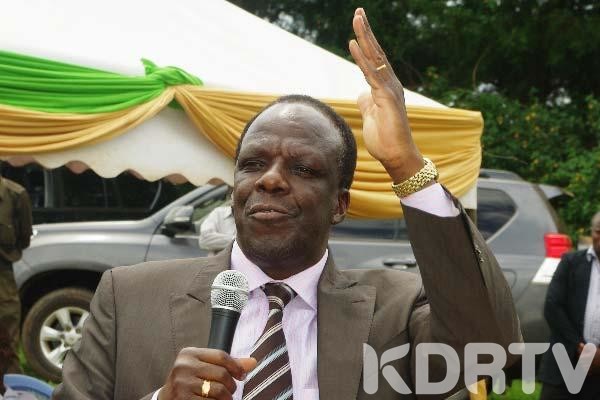 (KDRTV) – Senior Luhya Politicians have warned COTU Secretary General Francis Atwoli that his plans to install Kakamega Governor Wycliffe Oparanya as a Luhya Kingpin will not see the light of day.

Immediately after the meeting, the ODM Deputy Chair announced that all Luhya leaders will meet at Bukhungu Stadium on January 18 to chart the political way forward for the community.

A section of Luhya leaders has termed the Khwisero meeting a convention of Raila sympathisers who do not have the interests of the community at heart.

Atwoli has defended himself, saying that he hosted Raila as his relative and that they did not discuss any politics.

“Raila is my relative and he visits me every Boxing Day when he brings around his family. We don’t discuss politics during such meetings,” Atwoli said.

Former Kakamega Senator Boni Khalwale warned the COTU boss that he won’t succeed in installing Oparanya as a Luhya Kingpin just to advance Raila’s interests in the region.

“We want to warn Atwoli that whereas in the first instance he succeeded to lie to our community that he had the powers to anoint a leader which he did when he named Musalia Mudavadi as community spokesman, we know that he now wants to anoint Oparanya to keep on giving Raila a foothold in the community. He has shortchanged Luhyas for decades,” Khalwale said.

ANC leader Musalia Mudavadi and his Ford Kenya Counterpart Moses Wetangula have also dismissed the meeting slated for next month.

According to Wetangula, the meeting could further divide the Luhya nation. The Bungoma Senator has also claimed that Atwoli does not have the mandate to crown a Luhya spokesperson.

“He is trying to reinvent people who are past their date of sale. I have reached out to Mudavadi and we have agreed to consolidate the community and, by extension, Western. We have nothing to do with Atwoli’s gimmicks and antics,” said Wetang’ula.

Atwoli installed Mudavadi as a Luhya spokesperson in December 2016. The meeting was marred with chaos. Both Oparanya and Raila did not attend.