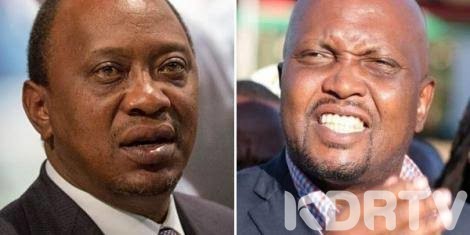 That is the million dollar question on matters Prime Minister’s post after the 2022 elections.

Former Jubilee Vice Chair David Murathe has claimed that nothing stops Uhuru from going for the PM post in the next government.

According to Murathe, Uhuru can be Prime Minister if the Jubilee Party maintains its majority in Parliament after the elections.

“Nothing stops the President, as the leader of Jubilee, to head the government as the Executive Prime Minister as long as the party remains the largest in Kenya,” Murathe said on Sunday.

The outspoken Murathe, who is believed to be close to President Kenyatta, quoted heavily from the controversial BBI report.

However, what he didn’t mention is the fact that a Prime Minister must be an elected Member of Parliament, according to the same BBI recommendations.

So for Uhuru to be considered for the PM post, he must first go back to Gatundu South and campaign against the firebrand Moses Kuria.

“If we pass the recommendations of BBI report as it is and DP Ruto wins the Presidency while Uhuru Kenyatta is the Jubilee Party Leader with a majority in Parliament then former President Uhuru can be the PM of course after battling it out with Moses Kuria,” Senate Majority leader Kipchumba Murkomen said in response to what Murathe had said.

Would Uhuru lower himself to go to a contest with Kuria just because he wants the PM Post?

More than five thousand people believe Kuria would beat Uhuru in a free and fair election. What do you say?

For President Uhuru to become Prime Minister, he must win Against Moses Kuria in Gatundu South. Lets do it here..

Who would you vote as your 2022 MP for Gatundu South

Imagine asking the people of Gatundu to choose between Moses Kuria and Uhuru. Do they have the choices really or they are better off without representation?

People of Gatundu are in a difficult place. Choosing between Uhuru and Moses Kuria is like choosing to die through hanging or through stoning. The end result is the same

Anyway, Moses Kuria recently asked both Uhuru and his mganga Raila Odinga to go home in 2022. It would be interesting if Uhuru sends him (Moses) Kuria home.

There have also been rumors that President Uhuru’s son Jomo Kenyatta is also eying the Gatundu South seat in 2022.

Will Uhuru vie against his son? Time will tell.