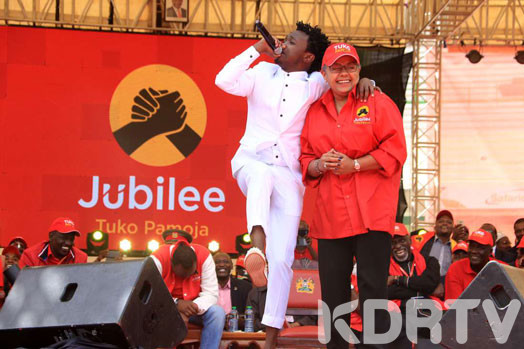 Gospel singer Kelvin Bahati has cleared the air on how he benefited from campaigning for the Jubilee Party in the 2017 elections. The Mama hitmaker claims that his life never changed as the Jubilee Party never fulfilled the promises it made to him.

Bahati has been at the center of brutal social media trolls after endorsing Rapper King Kaka’s new hit single Washenzi Nyinyi. The song details all the ills and failures of the Jubilee Government.

Kenyans literally gave him the F word. He campaigned for Jubilee and is part of the problems we are facing now.

“You’re the same clown who headlined a Jubilee Party campaign rally and even sat in the President’s chair to crown your sycophancy. Kama kuna mjinga kuliko wajinga wote ni wewe na Ben Githae. We aren’t in your Champions League of Wajinga,” blogger Gabriel Oguda replied to Bahati’s tweet. Oguda is one of the many Kenyans who blasted the musician.

But Bahati says that just like the rest of Kenyans, he was also duped by the Uhuruto government. In fact, he almost lost his wife during the campaigns because he was never at home.

He said he is just a victim of deceit just like the rest of Kenyans who woke up at 4 AM to vote for Jubilee. He thanked his fans for standing with him because he is not sure where he would be without them.

He has asked Kenyans not to repeat the same mistakes in 2022 because they will cry for another five years.

But if 2022 Tutajishau Tu Vote According to Our Tribes and Not the Eligibility of the Candidate…. 2023 to 2027 KILIO NI KILE KILE!!! #MjingaMimi #WajingaSisi #WajingaNyinyi LET'S ALL WAKE UP 🙏🙏🙏

Bahati made headlines in September 2016 at a Jubilee Convention Rally in Kasarani Stadium. He forced President Uhuru Kenyatta from his seat, went ahead and sat on it to perform for first lady Margaret Kenyatta. Some people criticized him for lack of respect.