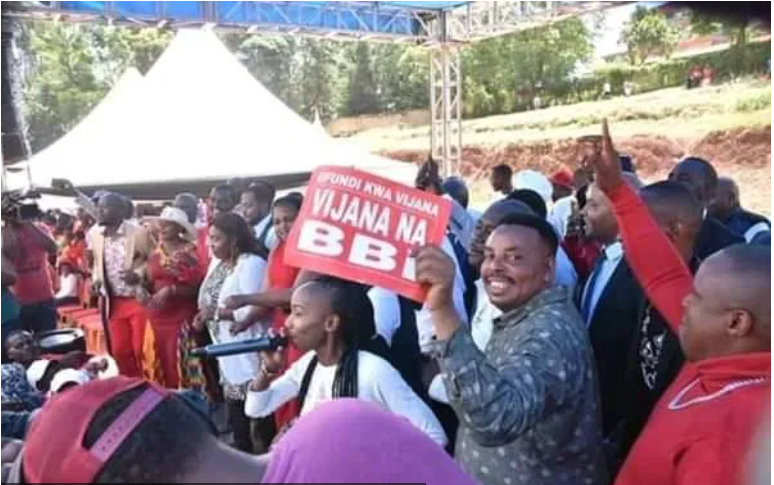 The popular Kikuyu singer and staunch Jubilee supporter recently confessed that he will only vote for whoever Uhuru wants in power come 2022.

“Because I am a staunch supporter of Uhuru, if he says I support Raila, I will do so,” he remarked.

“When we met Raila and other leaders together with other artistes like Sir James, it was part of our continued push in fighting for the rights of musicians especially on the issue of Skiza revenue share. I am not saying that I won’t support Raila.”

READ ALSO: Raila: I Will Legalize Changaa If You Elect Me

He said that Kenyans love trolling him but that won’t sway him into voting someone else.

“I saw Kenyans trolling me the other day after I was captured in a picture with the ODM leader Raila Odinga and businessman S K Macharia,” he said.

“Some were saying that I have moved to support ‘Baba’ but what they didn’t know was the context of our meeting. But I am now used to trolls. I have lived with the notion that I can be trolled anytime and even trend for negative reasons so that does not bother me anymore.”

Githae said that he’s a close friend of Uhuru and that means he will support him in whichever way he likes.

According to the singer, Uhuru normally reaches out to him now and then something that has made some people in his inner circle bitter.

“If I am your friend, I can’t just wake up one morning and betray you for nothing. Even if people call you a witch and expect me to join you and claim you are a witch and as a friend you have never bewitched me, if they say you are a thief and I have never seen you stealing, I won’t believe them and so I will make my personal choices depending on what I believe and not what people think,” he quipped noting that he has been supporting the ‘Handshake’,” he said.

“It is very hard to call him and it is not even right to think you can call the president on his mobile number anytime. You can text him and he responds. There is no time I have ever needed him that he has not been there for me. The other day I lost my mother and he called me to give his condolences and also directed me to someone for support. Sometimes, when he wants me to go and fulfil a mission, he calls me and I have no obligation but to adhere. That is how tight I am with him,” Githae commented when asked how often he talks with the president.”