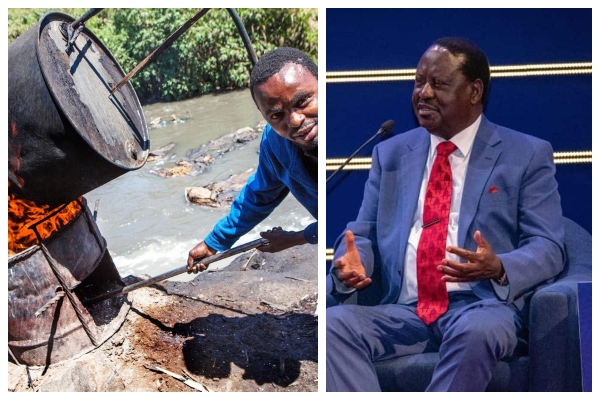 ODM leader Raila Odinga plans to legalize Changaa and build industries that will increase its production once in power.

Raila, while speaking in Turkan on Thursday, showed displeasure on how police have been handling Changaa consumers and dens saying it’s a source of income that should be respected because it feeds families.

The former Prime Minister noted that if he manages to become President, his government will build factories to enhance Chang’aa production suitable for human consumption.

Raila’s announcement is any new.

In 2017, Raila also made the same promise saying he’ll bottle the drink and make it legal once in power.

RAILA ODINGA says he will legalise traditional brew changaa if elected; argues there is no law that illegalises drink. pic.twitter.com/S7PIXw9hXx

Raila’s recent announcement comes just a day after ODM Secretary-General, Edwin Sifuna asked him to make a promise of reducing alcohol prices when he becomes President in 2022.

Sifu, who made the request at Kamukunji Grounds moments before Baba addressed the crowd, claimed that youth want the cost of alcohol to go down so that they can have fun.