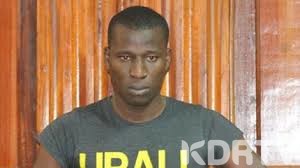 The suspect was arrested alongside another suspect called Emmanual Nyamweya on Monday, January 20.

The DCI revealed that Detectives from Gigiri have arrested the duo after successfully probing the spectrum of the extortion, blackmail and accusations

“The two had just received KSh 1 million from one of their victims being a down payment of KSh 17.5 million. They had demanded the money as a precondition for pulling down libellous posts appearing on a website allegedly owned by the suspect,” the DCI stated.

“The exhibit money was recovered and the two suspects will be arraigned tomorrow,” the DCI indicated.

“Yes, this is true. The suspect has been drafting malicious and unsubstantiated articles on his blogs in a bid to taint our otherwise good reputation. He has also severally tried to bring the CEO’s personality to disrepute as a way to extort monies,” the manager said.

However, the bank had claimed that the post by Nyakundi was baseless and aimed at siling the name of the institution.