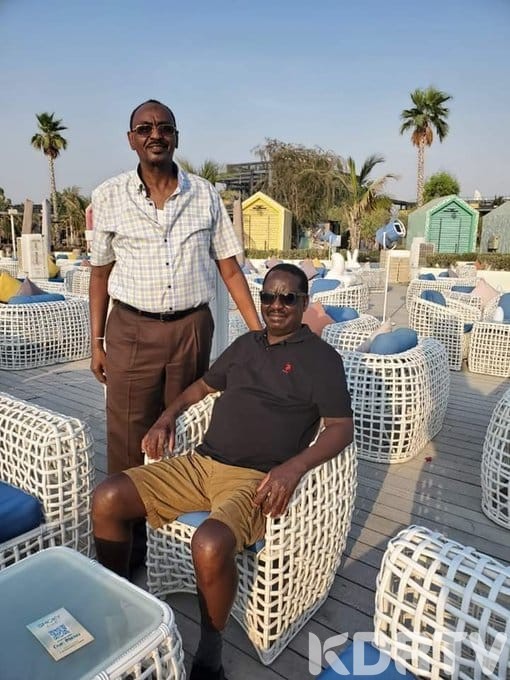 (KDRTV) – ODM leader Raila Odinga is doing well in Dubai after undergoing surgery to fix a nerve one of his legs early this week. Raila’s family has regularly updated Kenyans on baba’s health. The updates have included pictures of the former Prime Minister enjoying himself in UAE.

On Tuesday, a photo of Raila and Hass Petroleum Group Executive Chairman Abdinasir Ali was widely shared on social media. In the photo, Baba is donning a shot and black sunglasses. He looks happy.

Former Kakamega Senator Boni Khalwale has surprised Kenyans after sharing the photo with a message of goodwill for Baba. Khalwale, who has recently evolved into Baba’s biggest critics, reminded Kenyans of the battles they fought together in the runner up to the 2017 elections including ‘eating’ teargas together for six hours. He finished the tweet by saying that he has been praying for Baba and wants him to get well soon.

When it is written, the chapter on your friends will record the sacrifices I met for you in Zanzibar, Okoa Kenya Initiative, 2017 campaigns “and the 6 hours of teargas/gunshots/tears/blood/death, on your arrival from the USA. You are in my thoughts & prayers. Do get well soon Raila Odinga,” Khalwale said in a very passionate tweet.

When it is written, the chapter on ua friends will record the sacrifices I met for u in Zanzibar, Okoa Kenya Initiative, 2017 campaigns & the 6 hours of teargas/gunshots/tears/blood/death, on ua arrival from the USA. U are in my thoughts & prayers. @RailaOdinga, do get well soon pic.twitter.com/z83nf8Zz4w

This is the same Khalwale who was pelted with stones during the by-elections in Kibra last year. Khalwale, a Tanga Tanga Member who has never hidden his disdain for Raila publicly saying he has been praying for the African Union envoy. Kenyans have said this is very mature politics.

You have penned a great one doktari….. hakika leo hakuna tembe imeanguka kwa maji ya kupika ugali…. the post is very sober unlike some of your previous ones.