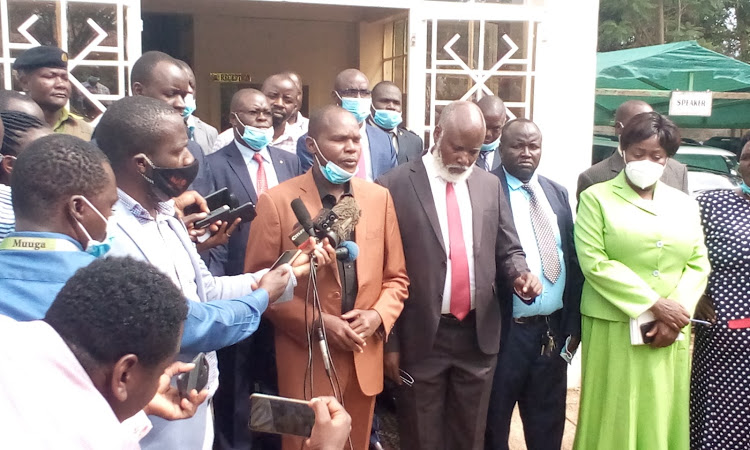 A section of Migori MCAs on Tuesdat

(KDRTV) – Embattled Migori Governor Okoth Obado can breathe a sigh of relief (at least for now) after the county assembly deferred his impeachment motion.

Migori County Assembly speaker Boaz Okoth told the media that he was forced to defer the tabling of the motion over COVID-19.

“There was anxiety so I saw it better to push it. The Covid-19 regulations in the assembly were also not followed,” the speaker said.

There was tension in Migori ahead of the opening of the assembly which had been on a one month recess. Armed police officers patrolled the town from morning.

At the Assembly, journalists and MCAs flouted COVID-19 social distancing rules as they attempted to get a glimpse of what was happening. However, it was an anticlimax as the session lasted less than five minutes. The only business conducted was reopening of the assembly and a message from the speaker.

The speaker later said that journalists had been misled by people from Nairobi.

Obado: I have not bribed or intimidated MCAs. I have nothing to fear. If anything, the Migori MCAs are independent thinkers who make their own decisions. pic.twitter.com/umiByRT74r

“The motion will not come today, that is a process. We believe the heavy contingent of police officers and media in the assembly is because they have been misled from Nairobi,” Okoth said.

Obado’s impeachment has caused political tension in Migori with at least half of ODM lawmakers said to be opposed to the motion.

Last week, the speaker said he was attacked by unknown people at his Kisumu residence. He said the attack was related to the Governor’s impeachment.

Counties brought the promise of better service delivery and Kenyans have high expectations of the system of governance. By and large it has worked but at times political parties are obligated to step in and protect the interests of the people. | Hosted a Delegation from Migori. pic.twitter.com/fNksheRMYt

Meanwhile, ODM leader Raila Odinga met a section of Migori leaders at his Nairobi office of on Monday. It is not clear what he discussed with the delegation led by Senator Ochilo Ayacko. ODM is sponsoring Obado’s impeachment.