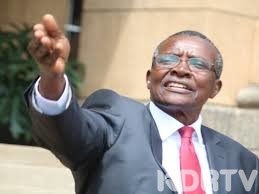 KDRTV News- The Chief Justice of Kenya David Kenani Maraga has refuted claims made by a woman by the name Mary Kwamboka Onyancha that he sired a baby with her.

The woman who was caught in front of Cameras wailing and blaming the Chief Justice for neglect at the Milimani Law Courts later told Journalists that she has tried her level best to convince Maraga to take care of his baby but no response from Justice Maraga.

Mr. David Maraga an exuberant and no nonsense Judge who stood by his colleagues to historically nullify and ordered a re run for the Kenyan Presidential election in August 2017 has been in logger heads with the Executive over the hiring of 41 Judges who were recommended  by the Judicial Service Commission but the Executive has accused it for recommending some corrupt Judges in the list but never named the corrupt ones.

The Chief Justice has instructed his Lawyers led by Dr. Danston Omari to urgently rebut the claims and if need be he is very ready to undergo a DNA test to prove his innocence by people who are out to tarnish his name career, faith and reputation which he has built by over 6 decades.

Dr. Danston Omari has scoffed at the woman whom he calls a bait for hire and provided preliminary evidence disputing her claims. The Registrar of Births by the name Shamwata and neither an officer by the name PK. Otieno claimed to be working in Nairobi office where the Certificate was issued can’t be traced in any part of Kenya. This is a political ploy meant to hoodwink the Chief Justice to resign.

Dr. Omari went a head to allege that many attempts have been made to push out the CJ from office without success. There are a number of petitions filed to remove him from office but have failed and currently there’s one ongoing and Chief Justice has promised to litigate the petition at Uhuru Park to prove his innocence.   His term in office ends in January 2021 pending renewal if he chooses to.