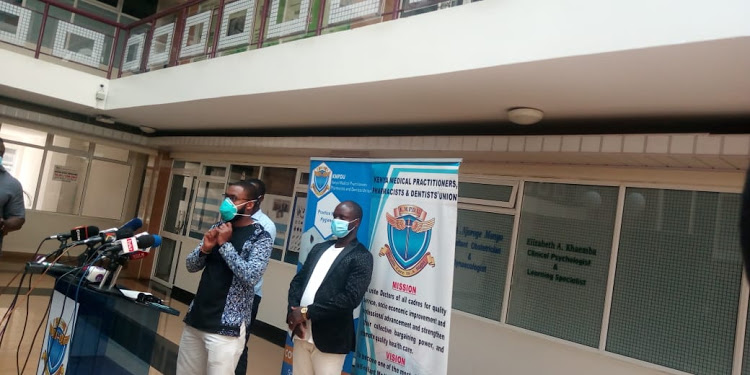 (KDRTV)-The senators’ last-minute efforts to plea with the doctor to stop the planned strike have hit the dead end.

The Kenya Medical Practitioners Pharmacists and Dentists Union to leadership declined the Senate Health Committee’s request to postpone the scheduled strike for Monday.

The Union had called for a strike citing industrial action grounds after at least 10 doctors died of coronavirus.

The doctors complained of a lack of comprehensive medical cover for health workers, stipends, and allowances.

At the same time, KMPDU secretary-general Chibanzi Mwachonda disclosed to the Senate committee that the decision on there to give them seven more days to arrange their side was not within his powers.

“It is subject to consultation with stakeholders and doctors. You will give me time, I will consult and get back,” Mwachonda said.

Mwachonda responded after featuring before the committee chaired by the Trans Nzoia senator Michael Mbito to deliberate on the strike notice.

Mwachonda also said that they are not going to call off the strike unless their grievances are addressed.

“The industrial strike is still on unless the county and national governments meet our needs,” Mwachonda told the senators.

However, Senator Mbito that there was still room for consultation and building consensus.

“We are going to invite and issue summons concurrently to all parties including the CS Health, Council of Governors and NHIF,” Mbito said.

“We are pleading with you to postpone this strike to allow for dialogue; we are sure that we will strike a compromise.”

During the meeting, Mwachonda has accompanied by b Union Chairman Samuel Oroko and the Central region branch secretary, Gor Goody.

According to the Union, the government has not addressed their grievances since they issued the strike notice.