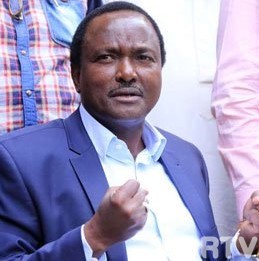 In a hard hitting statement, the Maendeleo Chap Chap boss questioned how the leaders who are enjoying the benefits of the handshake despite having nothing to do with it could ask Raila to step aside.

“It is baffling and to all purposes an indication of cognitive dissonance that some highly opportunistic leaders who were not party to the handshake and who are benefiting from the handshake are asking Raila Odinga to forego the handshake benefits in their favor. Talk of Hyenas waiting for the spoils after the hunt,” reads part of the governor’s statement.

PRESS STATEMENT ON THE NEED FOR OPPORTUNISTIC LEADERS TO RESPECT THE EFFORTS OF RAILA ODINGA. pic.twitter.com/0gQkKZ9nAc

His sentiments comes days after Wiper Leaders dared Raila to walk out of the handshake because Kalonzo Musyoka was ready to take his position.

The leaders who spoke at a church function in Mlolongo on Sunday, said it was time for Kalonzo to lead.

“If I invite you to my house, you should not come and start dictating to me how I should cook my food, how I should do my things…that will not be possible. If ODM is not satisfied with the terms and conditions of the handshake, let them quit,” Kitui Senator Boniface Wambua said.

ODM had threatened to walk out of the handshake deal if their man Raila Odinga is not respected.

Several leaders close to the former Prime Minister accused a section of State House Operatives of trying to block Raila from the 2022 succession matrix.

Raila’s elder brother Oburu Odinga even threatened that the African Union was ready to join forces with DP William Ruto.

I thought Wiper had signed an agreement with Jubilee party or that was a hoax @SenMutula https://t.co/I9LOIZIDQE

KDRTV understands that Raila has solved the issues with President Uhuru Kenyatta.