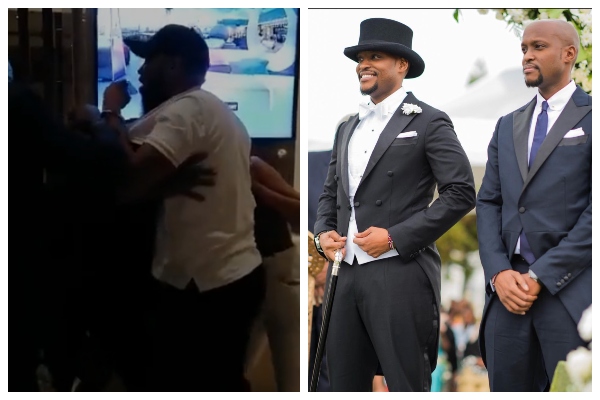 Janet Mbugua’s ex-husband Eddie Ndichu and his twin brother Paul have been called out on social media for allegedly assaulting two women at a popular hotel in Nairobi.

The two brothers were caught in a clip in a nasty physical fight while at Ole Sereni Hotel over the weekend.

According to the women involved in the fight, the two brothers attacked them after they rejected their advances.

“Yesterday my sister and I were attacked by the Ndichu twins for respectfully turning them down. They threatened to shoot us and ruin our lives,” the woman said.

“My sister was strangled by Paul Ndichu while her boyfriend who had come to her rescue was being strangled by Eddie,” she went on.

The two women said that they are scared for their lives following the stint.

“We dont feel safe to even go to a restaurant. Had my sister been alone only God knows what the two brothers would have done to her,” she confessed.

“To think its only been less than a week since Tirop was brutally murdered by her husband. We need to stop Gender based violence and violence against women,” she added.

In the video that has now gone viral, one of them is seen vandalizing a vehicle that was parked outside the hotel. He later gets inside, where two ladies and two men are in a physical encounter.

Here is the video of the said incident. The victims say the assault was also captured on CCTV. Over to you @IG_NPS @DCI_Kenya @NPSOfficial_KE pic.twitter.com/6wNugoFutf

The news comes at a time when Ndichu and Janet are fighting divorce rumors. The two, who have been married for almost six years now, are said to have parted ways because of Mbugua’s cheating sagas.