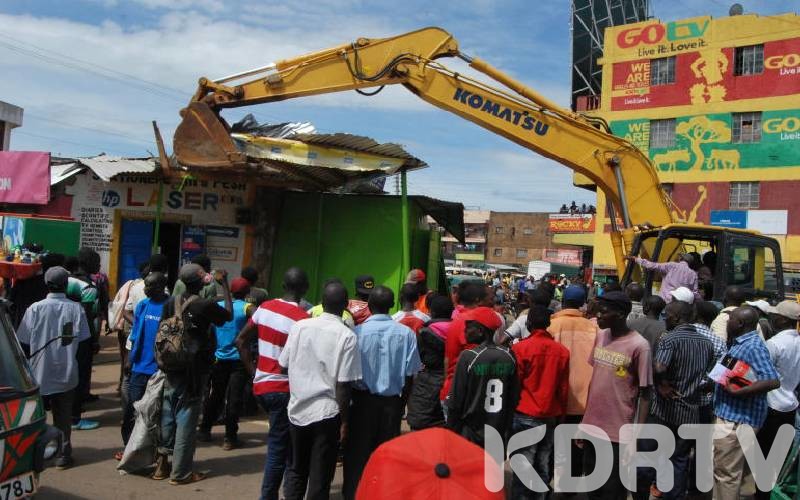 (KDRTV)- Traders in Kakamega are now counting loses after the county government embarked on the demolition of stalls and kiosks that were illegally built in Kakamega town.

The process that started on Saturday, January 5, 2019, has seen, many small business owners counting losses as the operation of the business are paralyzed.

According to the county government, the structures sat on the road reserves and thus had to be demolished to expand the roads.

The traders, however, claimed that the county authorities did not afford them humble time to demolish their structures as well as showing them adequate places to carry out their businesses.

They complained that they had secured loans to supplement their business and they are now worried about how they will settle the loans amid the disruption of the operations.

“I know we have employed corrupt officers who collect bribes from the traders to be allowed to operate from prohibited areas, I will lead the demolition of the structures until we bring sanity in the town,” he said.

Kakamega Town in the last five years has experienced rapid development which is evident through the construction og the Bukhungu Stadium, the expansion of the Kakamega Referal Hospital, construction of four-way to Webuye town and establishment of individual permanent structures among other spectra of development.

According to our earlier reports, Kakamega county boss had vowed to transform Kakamega to a city in the near future.

KDRTV also learned that the country through the ministry of transport has hinted to shift bus station from Kakamega town center to the town outskirt near Sichirayi Market.